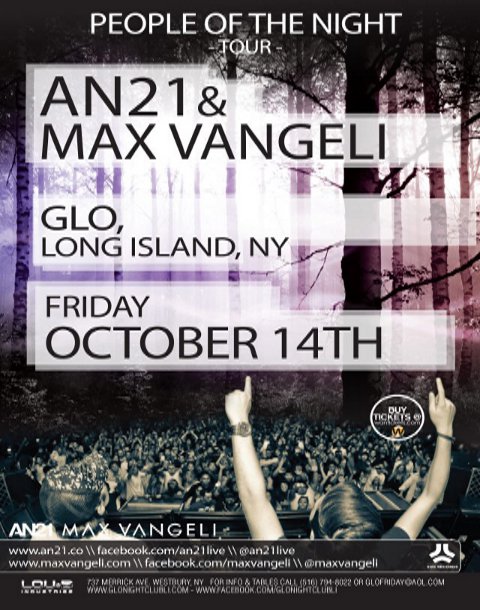 So many great shows in the NYC-area tonight. Wolfgang Gartner + DallasK, Chris Moody, TrentemÃ¸ller. I will be opting for AN21 & Max Vangeli, the young, highly touted, Swedish House Mafia-backed, duo. They will be at Glo on Long Island, the nightclub with the easiest VIP to sneak in to.

Big year for these guys, after their 2010 success of â€˜Swedish Beautyâ€™ and remix of Ellie Goulding’s â€˜Starry Eyed,â€™ the duo conquered 2011. Theyâ€™ve played at almost every major festival, even spinning main stage at Electric Zoo.

They have their first album on the way, and based off the previews of â€˜People of the Night,â€™ â€˜Whisperâ€™ and â€˜Fresh Start,â€™ it will be a hugely supported album.

These guys have set themselves apart from the people who support them the most. AN21 (pronounced Antoine,) younger brother of Steve Angello, doesnâ€™t need much help in the studio from big bro, seems like heâ€™s got it just fine on his own.

Bonus: The duoâ€™s favorite track to drop live as they said in our exclusive interview with them.

Summer’s unofficially here, so that means summer’s officially here! With that, countless uber-trendy weekday events shall be popping up all over New York City….