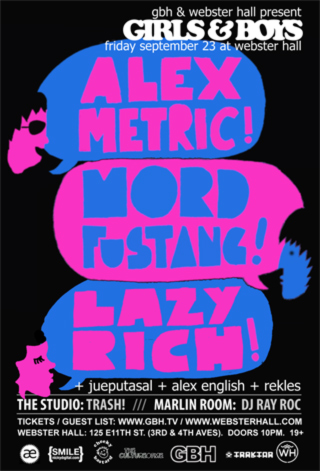 Wow! Webster Hall is relentless with their lineups, and it will only continue! Yes, Porter Robinson and Madeon are right around the corner. More important is who they are bringing to NYC Friday! Mord Fustang is an Estonian producer who has made quite a name for himself and has dominated Beatport charts. Check out a preview of his newest tune, ‘A New World‘. Lazy Rich is a wobbly electro king, with his tune ‘Better Wipe That Up‘ being bootlegged to high hell.

But to be honest, I am most excited for Alex Metric.Â Alex is touring in preview of his upcoming Astralwerks / EMI record Open Your Eyes – a collection of some of Alexâ€™s finest work including remixes of NERD, Beastie Boys, U2, and Phoenix along with his own original offerings â€˜Open your Eyesâ€™ and â€˜End Of The World.â€ The title track, â€œOpen Your Eyes,â€ was produced with Swedish House Mafiaâ€™s Steve Angello and features guest vocals from Ian Brown. Pretty massive!

To celebrate his upcoming tour Alex is giving fans the chance to win 2 tickets for each of his shows by entering a competition through hisÂ Facebook. Every entry will also receive an instant download link for an exclusive unreleased remix of â€œEnd of The World.â€ Don’t miss Alex, Mord, and Rich at Webster Hall. Going to be a big one. The fantastic residents, Alex English and Rekles are playing as well!

Get Heard With Indaba Music

Calling all producers! If you’ve always dreamed of a featured post of your own, right here on EO, here’s your chance. We are happy…