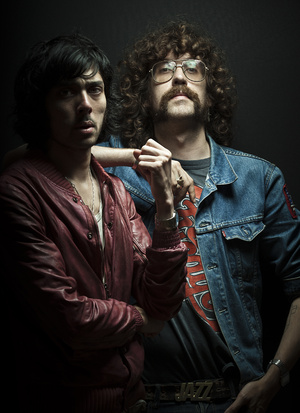 If you are unsure who JUSTICE is, kindly ex out of your browser immediatley. With that being said, the French geniuses and Ed Banger Records all-stars return to NYC for a 2 show run at Terminal 5 this coming weekend. Touring for their second studio album, entitled ‘AUDIO, VIDEO, DISCO’, the anticipation for this show far exceeds anything I haveÂ baredÂ witness to of late. Although the album is significantly less club friendly than ‘Cross’, to be able to see and hear Gaspard and Xavier recreate the tracks on their new album live will be a site to behold. Tickets sold out within minutes, but StubHub is always an option, as are the grimy scalpers lurking outside the venue. Expect to hear the underground gem ‘On n’ On’ Ruined by Rick Rubin, along with the smash hit ‘Civilation’ which was featured on an Adidas commercial.

Justice – ON N’ ON Ruined By Rick Rubin

What do we love more than new Indie artists that combine all genres of Electronic Music? Not too much. MAINS are an anonymous supergroup…