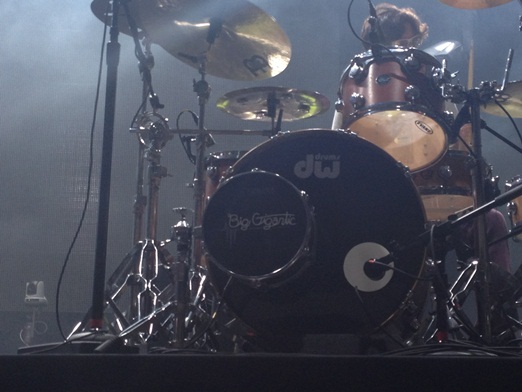 If you havenâ€™t heard of Big Gigantic by now, you may be living under a giant rock. The Colorado duo, comprised of Dominic Lalli (Production/Sax) and Jeremy Salken (Drums), have been carving out their own musical niche since 2008 with their unique brand of electronica, which seamlessly incorporates live instruments and elements of jazz, hip hop, and rock into traditional DJ-based dance music. Known for their genre-bending, high energy live performances, the boys of Big G graced the stages of Bonnaroo, Camp Bisco, Ultra, and Electric Forest just in this year alone, and embark on a 2 month tour this fall in continued support of their 4th and most ambitious EP, Nocturnal (which is available for free download here).

I was fortunate enough to sit down with Jeremy before their show at the newly reopened Capitol Theater in Port Chester, NY, a venue that has hosted legends like Janis Joplin and Pink Floyd in the past. In a time when some DJs rival diva-esc rock stars, chatting with the down to earth guys of Big Gigantic was a breath of fresh air â€“ check out the interview after the jump to see what they have in the pipeline, what they think about the current EDM explosion, and how they prep for their infamously spirited sets.

“We want our music to be as vast and non-genre related as we can. EDM is a great home for all of it, and it’s cool that everybody can just be. We were musicians first, before we played with computers, so we wanted to figure out a way to combine both worlds, and still be able to get away with playing our instruments and improvising and soloing.”


How do you guys like playing in New York?

We love the city. Weâ€™ve been coming here for a bit and they have always been good to us, New York people. We just did that Budweiser party at the Roseland and it was just insane. The time before we played Webster and that sold out in advance; it raged, and we were really psyched about it. And this thing came up and we were nervous that itâ€™s a free show and the Roseland is really big, especially since most of our fan base now is the 17-22 range. We were shocked that many 21+ represented.

So when are you coming back?

We are trying to figure out our next New York thing because we gotta go big. We were already wishing we could come over New Yearâ€™s, but we will be back in the winter time, guaranteed.

Youâ€™re about to embark on a 2 month long tour. How does being on the road affect your writing and producing?

Itâ€™s a little bit trickier, you have to be more regimented, like get up and say, Iâ€™m gonna go work on stuff. Dom is good about that. The majority of it gets made at home though – we are taking off most of this month to prep and get stuff going for the new album.

Awesome, when can we expect this new album?

Sometime in the beginning of next year, around the same time we dropped Noctural. So hopefully January-ish, February maybe.

Will you be giving it away for free again?

Definitely do it for free, put it on iTunes, Spotify, eMusic, all the different sites and just try and get it everywhere that we can.

Youâ€™re well known for your festival collabs â€“ can we expect some studio ones in the future?

Definitely working on some stuff for the new album, different tracks with different people 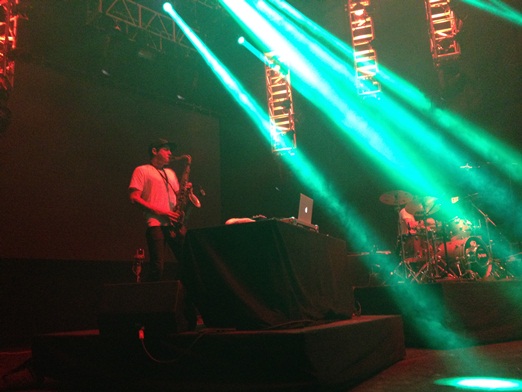 So how has the electronic dance scene explosion affected you guys?

The scene has really grown with a lot more people coming out; the whole thing has just multiplied. Itâ€™s always been a mix of EDM kids, the raver scene, and the jamband world, and now itâ€™s all kinda melting into one massive thing. Because the music hit main stream, like with Skrillex, its getting more attention, which is boosting all of us up – everybody is doing very well.

How do you prep for your live sets? How much of it is pre-determined?

A good bit of it – Dom has the set, but he also has 50 other tracks, so he can really jump around depending on the moment and the vibe of the crowd – heâ€™s really good at that. Itâ€™s all about having a certain flow to the show, keeping everyone involved, and if people are getting bored we gotta pick it up. We can go anywhere at any point, and the songs are chopped up also, so if he wants to make a song longer and keep soloing, we can do that before we go into the next part, we can vibe with each other.

You and Dom have been touring together for so long, so do you just roll with it at this point?

We donâ€™t even talk – Dom ‘woos’ at me a lot to get my attention, although sometimes Iâ€™ll be looking the other way when he gives me the signal but Iâ€™ll be like, I already know where you are going. Itâ€™s crazy -we have a lot of really cool moments. That’s one fun thing about playing instruments, it’s something you donâ€™t get if itâ€™s just two people DJing. The element of improv is huge.

Your sound continues to progress â€“ whatâ€™s in the future for Big Gigantic?

We like to explore everything that we can and not get stuck in one spot. We like all the different kinds of music, weâ€™re fans of it, and so we try and bring it in our thing and experiment with it. Dom is making a bunch of trap, and thatâ€™s fun. And Iâ€™m sure in 6 months, 3 months people will be over trap and it will be something else.

Your sets include a diverse selection of tracks from Madeon to Knife Party to Jay-Z. How do you choose what to include?

Dom is constantly searching for new music, so thereâ€™s always something. Weâ€™ve played gigs where I donâ€™t even know the song, and he [Dom] will just be like, ‘Oh yeah, weâ€™re playing this one tonight’. Sometimes he will give me the chance of hearing it in soundcheck and sometimes it will be right before we go on stage, like, ‘oh yeah thereâ€™s this new one, itâ€™s a dubstep tempo, Iâ€™ll cue you for breaks’; literally that will be the first time Iâ€™m hearing it and figuring out the drumbeat. I feel like he did that with Bonfire, he was like, ‘there is this new Knife Party song and its crazy’, and my reaction was, ‘yeah, thatâ€™s heavy as shit, I need to learn it in a minute’.

What do you guys do to unwind while touring?

This tour I definitely want to explore more. But most the time we just try to find the best restaurant we can, whether itâ€™s something from ‘Diners, Drive-ins and Dives’ or just a really dope BBQ spot or the best fried chicken. Thatâ€™s actually the main focus on the road, finding food. I feel like there needs to be a better food app specifically for people traveling. Maybe we could do something like whoever tells us the best recommendation in their town gets free tickets… 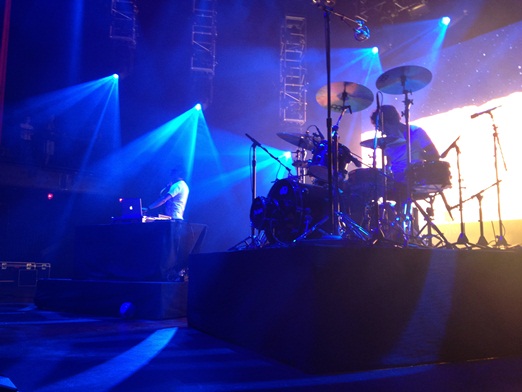 Big Gigantic will be closing out Day 1 of Atlanta’s Counterpoint Festival this Thursday, after which they will head home to CO for Rowdytown (feat. Dillon Francis and GRiZ) at Red Rocks Ampitheatre on Saturday. Be sure to check out their site for information on these dates, as well as their Uprising Tour.

Belgium brothers Dimitri Vegas & Like Mike create arena smashing tunes that will definitely resonate powerfully in the small environs of Lavo this evening….