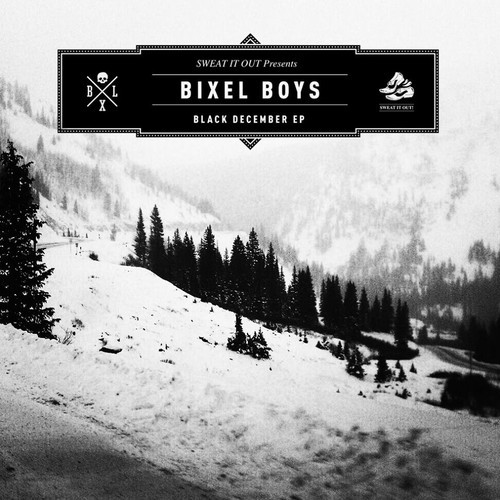 The L.A. DJ/Production duo, Bixel Boys, have released their first EP ‘Black December‘ a two track project marking this duo’s first original work presented by Austrilia’s Sweat It Out. The first track which is the title track ‘Black December‘ starts out with a lot of energy bringing you up with very sweeping stabs until dropping into a beautiful bass section, this track is definitely meant for big rooms and festival settings. The other track on this EP ‘Red October‘ is a bouncy cut inspired by festival electronic music which walks the fine line between techno and house, the Bixel Boys also draw inspiration from an old school dial up tone with the added sounds in this track. Here’s what the Bixel Boys had to say about the new EP:

Electronica Oasis: Black December has gotten a lot of support since the release, how exciting has this been for you guys?
Bixel Boys: Ian: Its definitely exciting to have guys like Fedde Le Grand and Treasure Fingers support the work you do. I got some chills when I heard it in the dark light sessions.
Rob: Finding out that it was played at Sensation in Oakland by Fedde Le Grand was pretty awesome. I think it’s great that the track can work both in a big room setting but also a more intimate one.

EO: This two song EP is your guys first original work, how much hard work and time did you guys put into this release?
Bixel Boys: Rob: Black December was a project I had started about 2 years ago. At the time it was only the horn stabs and string sections and I think I just wasn’t sure at the time what direction to take it in. A lot of time was spent in the studio on developing what kind of energy we wanted from BD and I think we had about 10 or so versions of the project before we were finally happy with it. Red October sort of just fell in to place in the early stages.

EO: What’s it mean for Black December to be presented by Sweat It Out?
Bixel Boys: Ian: It was and is a label we greatly respect and with a legacy of amazing acts like ‘cassian’, ‘monkey safari’ and of course ‘yolanda be cool’ just to name a few and some huge things on the horizon.
Rob: It’s actually the label we had in mind when we were putting the finishing touches on the EP. The fact that it ended up being recognized by them in that capacity was very rewarding.

EO: What musical backgrounds do you guys come from?
Bixel Boys: Ian: from an actual production stand point this is my first venture into actually creating music, other than like high school post-hardcore bands lol.
Rob: I’ve been a natural drummer since as long as I can remember. I had a pretty awesome run at Trombone in jazz band. Then an awkward young-teen years hip-hop scratch DJ run. I can’t keep my mind on one thing for very long.

EO: How did you become interested in electronic music?
Bixel Boys: Ian: I actually come from throwing parties at sxsw cmj and such and constantly being surrounded by dance music really pushed me to enjoy it.
Rob: I was always a fan of The Prodigy/Chemical Brothers/Propellerheads back in the day, but in college I started listening to Trance to get through staying up all night writing papers and that was sort of a slippery slope.

EO: Where does the name Bixel Boys come from?
Bixel Boys: Ian: Bixel was actually a street that my old office was on and downtown in la. My boss actually said Bixel Boys in passing and it just kinda stuck with me.

EO: Where do you guys go from here, what’s next from the Bixel Boys?
Bixel Boys: Ian: We have our 2nd EP coming out on a legendary NY house label and were very excited for that. As well as some remixes to look forward to.
Rob: New remixes in the pipeline, and a nice little variety of new originals that should keep people surprised by our sound.

Our very own Robert Palliser is back with a new track and he brought a few dead presidents and historical figures with him. In…