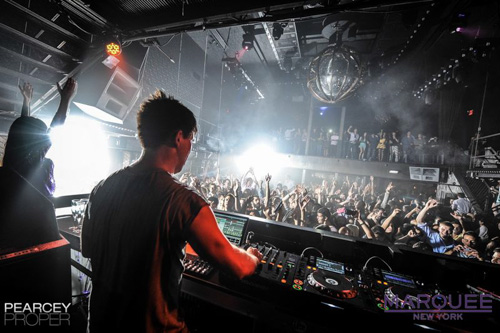 Hot off the release of his ninth studio album, BT celebrated his album’s #1 spot at Marquee NY on Saturday night by performing a set filled with soaring trance and progressive electro that blew the crowd away. He played classics such as Tiesto’s ‘Maximal Crazy’ and Arty’s remix of Ferry Corsten’s ‘Punk’ as well as recent hits off his new album, including ‘Skylarking’ and ‘Surrounded.’ The effects of these songs on a crowd is amazing. It’s hard to believe that they were just released this year, because they have the aura of a much earlier sound. They are already timeless tracks.

We met up with BT before he played to the sold-out club and talked about his inspiration for ‘A Song Across Wires,’ his love for Blade Runner, and his iconic hair. 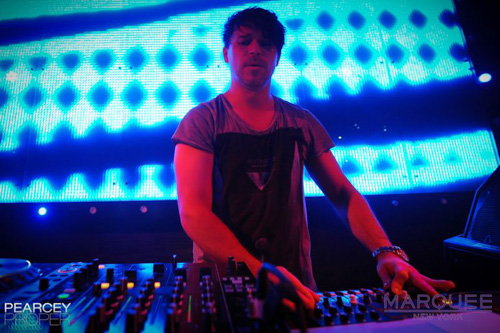 Electronica Oasis: How do you make your hair look so awesome?
BT: The girl that cuts my hair is super cool. Her name’s Irene. She works in Los Angeles. It’s so awesome to watch her work. She’s an effortless artist. Have you ever seen anybody that paints? It’s obnoxious how little they’re trying and how badass they are, you know what I mean? She’s just like, yeah, whatever, cigarette hanging out the side of her mouth, doesn’t f**king care, and you’re like, how did you even do that right now? In my work, I need to be in a bubble and it’s so thoughtful and I need quiet so I can think. She’s a cool girl. She really is. She has great music too, so I go to her more for music tips than for hair cuts. I’m not even kidding.

EO: How do you prepare for your sets depending on where you’re playing?
BT: I’m always changing stuff in the way that my performance autoload is configured and then I try to give myself, at least every two sets or so, some new little thing that I have to play around with to see if it’s any good, like worth pursuing. So my recent one was this filtered reverb throw that I can sidechain. And I spent a long time making this thing and the effect of it is amazing. I’m always experimenting and I’m always developing new software, so I’m always beta testing on myself, which is dangerous sometimes, ’cause computers could explode.

EO: In your live performances?
BT: Yeah, I’m always using alpha builds and things without UIs on my laptop, which is scary sometimes, but it’s the way that you figure out if it’s going to work. I have to field test them. 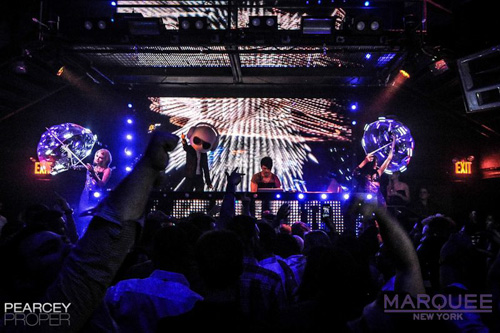 EO: Do you think that dance music right now is in a place it never has been before?
BT: I think it’s broader than it ever has been. I think that there’s more detail than there ever has been and there are more interesting things cropping up every moment than there have been. Dance music has always been very broad and that’s part of why it appeals to me. What I do is very broad. Now more so than ever, there are things happening in dance music, that it’s more exciting than any other music happening now. Usually my inspiration comes from indie rock and film scores and those kinds of things. This is the first time I’ve heard people making music in my entire life where I’ve even had the question, even once, “What the hell was that?” or “What is that sound?” or “How did they do that?” That’s not me, ’cause I’m building sh*t to do these things. And so that’s been really inspiring for me. I’ve been studying, listening, and learning more than I ever have in the last couple of years and a lot of that has to do with bass music and bass music culture. I think that has been the most exciting thing that’s happened in dance music ever, honestly, and this record is not that, but there’s a lot of inspiration from that. 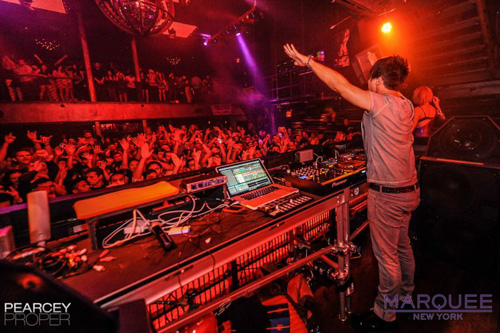 EO: Do you have any plans to do anymore movie soundtracks in the future?
BT: Yeah, absolutely. I am actually doing my first show. I’m doing a show for ABC right now called Betrayal and my friend Patty Jenkins, who I did Monster with, she directed the pilot for it. So I’m doing thirteen episodes of the show, the whole first season, so it’s going to be a crazy experience to make thirteen albums.

EO: So how is that different from writing music for a movie?
BT: There’s no time to second guess it. The dream job for a movie score is to get hired before they ever shoot a frame. Monster was like that for me, so was Fast and Furious. I got to the set, hung out with the actors, got inspired, hung out with the director. It informs what you write. The Fast and the Furious theme that I wrote, I wrote driving in the car on the way back from the set. It just came to me. It was hard for me to figure out because it’s 6/4, it was hard for me to remember. It came from being on the set, being super inspired. Something like this is so condensed that on Monday, I get the show, and I have to give them an hour of music by Thursday. It’s literally an album. So there’s no time to second guess yourself, but it’s a new kind of exercise. It’s totally on instinct. It’s a lot of playing as opposed to carving things in a computer. It’s a lot more playing instruments, which is wonderful for me. Composing, you’re just going on intuition and gut instinct. And then there’s that day where I get all my notes and I stay up all night and I’m almost dead by Friday, but then I’ll be doing shows so it’s going to be thirteen crazy weeks for sure. 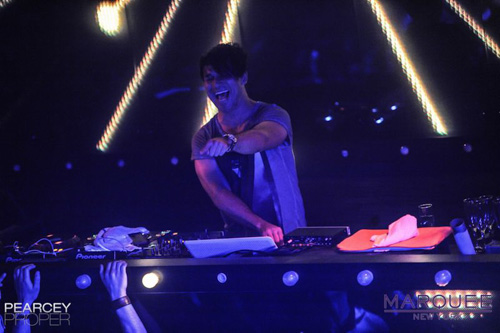 EO: Do you try to have consistent themes, because it’s a show?
BT: For sure. I wrote four or five dominant themes for the show. The thing is, you have to adapt. There’s a big fight in one scene or there’s a chase through Chicago city streets and you can use the theme of these two characters and how they interact, but it has to be adapted. Which is kind of like writing a new piece of music with the same melody. It’s almost like remixing something. Everything is tailor-made for the scene. It’s daunting work, honestly, but it’s so much fun to do. It’s a challenge. I’m really excited about it.

EO: What do you think about how electronic music is really getting into a lot of soundtracks? You have Trent Reznor, you have M83, a lot of people doing more movie soundtracks. What are your thoughts on that?
BT: I think it’s very interesting. A lot of very artistic musicians, really soulfully-trained musicians in bands are drawn to that because it’s the next level. You get to really write these big compositions. It’s different, it’s all about subtly and nuance, which you can’t do for a record. It’s too much. And by too much, I mean too little. It’s too subtle. You’re a team player in this overarching creation. These are not easy things to do. I watched Blade Runner and that was the most amazing thing I saw when I was eleven years old. I rode my f**king bike to the theater. I watched it four times in a row. I ate an entire box of Hot Tamales. I was like, “Some day, I have to do this.” And then when you get on the other side of that and you’re actually getting to do some of that, what you never realize and what you’re never told is that you’re going to have someone who knows nothing whatsoever about music, who’s not motivated by the overall greatness of whatever all of you as a group are trying to achieve, who are completely motivated by money and who is curating your work. And if you think you’ve ever been frustrated creatively by something, you’ve never experienced that level of frustration. Being curated by a bunch of people who don’t know anything about music is hard. As musicians, we’re empaths. We want to be around good vibes and feelings and that comes out in what we do.

Don’t bury electro just yet! There is still some quality hardness out there, it’s just not around these parts (America.) French electro almost never…