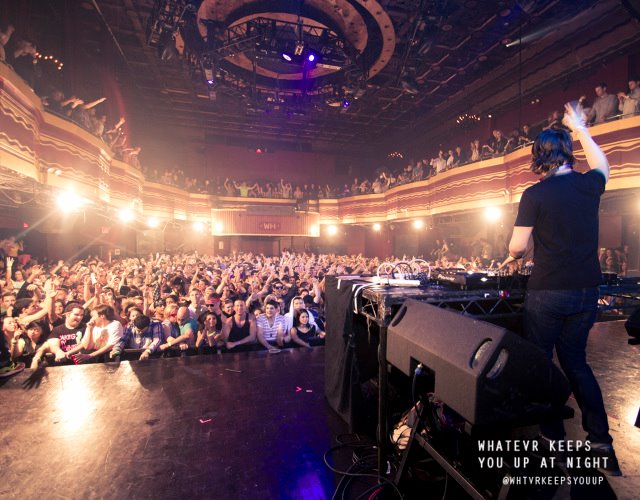 I was able to sit down with the homie DallasK after his opening gig for Wolfgang Gartner this past Friday at Webster Hall in NYC. I first met Dallas in Orlando at Electric Daisy Carnival when he and his collective, DEFEP, played a set. By the way, if you have not heard of these 4 dudes (Henry Fong, DJ Nymz, Killagrahm and Dallas), enlighten yourselves HERE. Although it was hard to concentrate on interviewing Dallas between pulls of Grey Goose and hearing Wolfgang Gartner drop ‘Menage a Trois’ live, I did my best. Dallas has produced notable tracks such as ‘Front/Back’ released on Burn The Fire Records and ‘Jupiter’ released on Spencer and Hill’s Bazooka Records. He is also a 20 year old bootleg king! Check out my personal favorite bootleg of his, Porter Robinson vs. SHM ‘Leave The Wildcat Behind You’ below, and click READ MORE to hear my Q & A with this young and promising producer.

EO: What was your biggest break as as solo producer? I know you had some success with Front/Back and your big Nero ‘Guilt’ remix…

Dallas: I had general success, mostly with blog hype. Front/Back and the Guilt remix were the two in particular that started getting support from some world-class DJ’s. Sander van Doorn has been playing the ‘Guilt’ remix a lot. BT played Front/Back as well. Some really legendary people that I look up to are playing my music, so it has been awesome.

EO: What has been your favorite gig to date?

Dallas: Oh, this one that I just played at Webster Hall. It was awesome.

EO: What has been your favorite DEFEP gig to date?

Dallas: We played before and after Calvin Harris in Orlando. We have such a great following in our hometown of Orlando that everyone stuck around and just raged. There was like 1,500 more people and it was just awesome!

EO: Whats it like to be 20 and play in all these clubs where everyone is drinking, yet you can’t legally drink.

Dallas: Well I have an undisclosed drink in my hand at the moment…But yea, it is amazing to be playing in all these clubs but I honestly don’t feel like I’m 20 at all.

EO: What have you been listening to lately? Maybe list some stuff that our readers might not know about…

EO: Do you have a mentor or someone older that is somewhat guiding you?

Dallas: I generally have taught myself up to this point. But now that I am working with producers from all different types of music, I am learning a ton from them. I just use the knowledge I gain in the sessions. I worked a lot with Peace Treaty and those guys are just unbelievable. They taught me the importance of percussion.

EO: I know that you were into the ‘Bangtuk’ track that I put out on my label. What other tracks have you been consistently playing?

Dallas: All of Tommy Trash’s stuff is amazing. Porter’s new EP is really big. The one I have been playing a lot is this big Keach remix. That guy is super talented.

EO: How big of an honor was it to be direct support for Wolfgang Gartner?

Dallas: It was really awesome dude. I have always loved Wolfgang and his music. Honestly, my tracks wouldn’t be where they are today without Wolfgang Gartner so it is truly amazing to have opened for him!

EO: First time playing in NYC. What did you think?

Dallas: I have actually never been to New York so this was amazing. I mean I am from Florida, but I really loved this city and I cannot wait to come back!

Thanks to DallasK for sitting down with me and you can check him out onÂ TwitterÂ andÂ Facebook!

And, now, for some house music. If you’ve been a fan of dance music for some years now, you may have one or two…