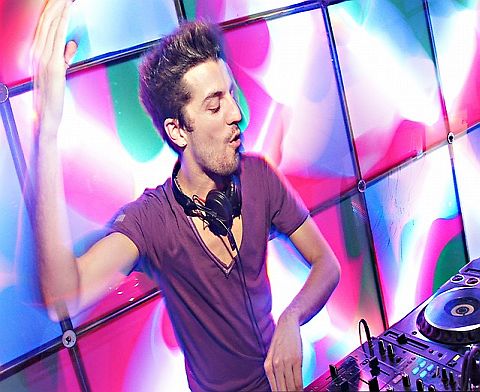 Gregori Klosman has been on an absolute tear recently. Hailing from Paris and putting out monster records like ‘Fuckin Down‘, ‘Mutfakta‘, and his recently released ‘Jaws’ (buy it on Beatport here!), Klosman has been super busy in the studio and his work is paying off. Klosman is one of the few producers on the scene that is able to seamlessly mold together two styles of house: The french touch and dutch house music (Chuckie’s influence on Gregori). Everyone at EO is pretty much in love with the Klosman KaT and we were super stoked when he agreed to answer some questions for us. Have a listen to his techy masterpiece ‘Bombata’ and his new track ‘Zulu’ below. Then be sure to click read more to hear about his epic collaborations with Chuckie, how the French Touch has influenced him, and what the next track with his buddy Tristan Garner will sound like!

Electronica Oasis: Hey Greg. Where are you from and where do you currently live?
Gregori Klosman: I’m from Paris (FR) and still live here.
EO: Who was the first artist that turned you on to dance music and what track was it?
Klosman: DAFT PUNK is definitely the artists who made me love electronic music. But if you want a real dance artist, Erick Morillo was the first one with “Reel to Real – I Like To Move It“. (Editors Note: For all you dance music n00bs out there, the legendary house producer and Subliminal label head Erick Morillo actually created the #1 Jock Jam of all time aka ‘I Like To Move It’)

EO: How have you been influenced by the french touch? It seems like you have somewhat embraced the dirty dutch sound recently…How can you not when you work with Chuckie so often!

Klosman: The french producers were everywhere on the scene. Of course Daft Punk, Cassius, Bob Sinclar, Alan Braxe, DJ Falcon, etc…Maybe that’s the reason I love to try and produce different types of house music. Because those guys don’t care, they just produce music, without any rules. French people hate rules, everybody knows that…haha. Concerning Dirty Dutch…It’s true that I really like it. But I think it’s important to have new sounds, new ideas and not copy each other from a style perspective. Dirty Dutch is not only about bleeps and tweak sounds. It’s about how you surprise people with nasty beats and sounds.
EO: Speaking of dirty dutch, what was it like to work with Chuckie on ‘Mutfakta’ and the various remixes you have done together?

Klosman: Chuckie & I have the same feelings and point of view about house music. So it’s really easy to work together, whether it’s a track or a remix. And a lot of fun of course ;)

EO: How did you guys decide to team up and remix NERVO’s ‘Irresistible’. We interviewed them as well and absolutely love their stuff..almost as much as your stuff! :)
Klosman: Yes NERVO are really nice girls and good producers/musicians. Before ‘Irresistible’, I sent a direct message to Chuckie on Twitter, to thank him for playing my tracks in all his sets. The answer was “let’s work together, I love your sound man”. So he asked me if I was interested in remixing NERVO’s track with him, and the vocals of Ollie James were a great inspiration. Today, we are good friends and love to produce together. But for now I need to focus on my own tracks.
EO: How did you come up with the idea to make a track focused around the ‘Jaws’ theme song? Pretty innovative stuff.
Klosman: Actually, I was watching the original Steven Spielberg ‘JAWS”. I was wondering why nobody used that famous theme for an uplifting break. I mean the pressure is so big. That was the birth of the track.
EO: How amazing was it to play at the Techno Parade in Paris this year? I love the video of you dropping ‘Mutfakta’. What an awesome reaction from the crowd…
Klosman: It was my first time @ the Techno Parade. I was a bit scared, but when I hit the PLAY button, something changed in me. I smashed the crowd like a beast. After my set, I didn’t remember anything haha. Hopefully, the videos helped me. Nice party outside, during the day, playing all my own tracks and bootlegs in front of 5000 peoples. It was the first time I played ‘MUTFAKTA’, and according to the crowd, it was worth playing it.
EO: What do you think of our nickname for you. Gregori “The Kat”Â Klosman? Pretty strange haha…
Klosman: Pretty strange yes, because I hate cats. Not all of them, only Tristan Garner’s one because it made my hand bleed. Lol. But it’s a great nickname, I feel like a Marvel Super Hero. KLOSMAN “The Kat”.

EO: What DAW do you use mostly for your productions? Any particular sound packs out there that you are really fond of at the moment?

Klosman: Only Logic Pro 8 for producing tracks and remixes. Ableton Live is only in my computer for bootlegs. Honestly no favorite sound packs, as I am always looking for new sounds.

EO: Who would your dream collaboration be with and what would it sound like? For some reason I feel like you and John Dahlback could make an absolute monster.

Klosman: Fedde Le Grand, Axwell and Daft Punk. And it would sound new and different. I love the way producing with someone else brings you to another level. Sometimes magic happens. Maybe I will work with John one day, who knows?

EO: Do you and Tristan Garner have any future plans to make another track? ‘Fuckin Down’ is honestly one of my favorite tracks of the past year.

Klosman: The new track is already on its way. It’s called ‘BOUNCE’ and it’s a freakin’ banger. Trust me. We are actually in the studio to finish it up. Stay tuned on EO folks ;)

EO: What about Norman Doray or Arno Cost? Any plans to make a track with them? I know you guys are all pretty good friends.
Klosman: For now, no collaboration, as we all have our own projects, and it’s hard to catch up all together in the studio. But maybe later in the year.

EO: What is next for you? Will we see a show in the U.S anytime soon?

Klosman: My new track ‘JAWS’ will be released february 6th on Beatport through Dirty Dutch Digital vol. 03. In February, another EP will also be released. Its called BOMBATA/ZULU on Nero Recordings. And I’m happy to announce to you I will play at MARQUEE (Las Vegas) Feb 11th and LIV (Miami) Feb 12th with Chuckie. I hope to see all of you there.
EO: Thanks homie! Good luck with those gigs!
For more info on ourÂ  buddy Gregori Klosman, check the links below!
Official page: www.gregoriklosman.com
Facebook: www.facebook.com/gregoriklosman
Fan page: http://www.facebook.com/klosman
dirty dutchGregori KlosmanInterviewjaws

If A MoustachÃ© Made Music : Volume 5

With Movember at it’s end,Â  I feel it’s been wayy too long since I’ve shared the latest installment of If A MoustachÃ© Made Music….