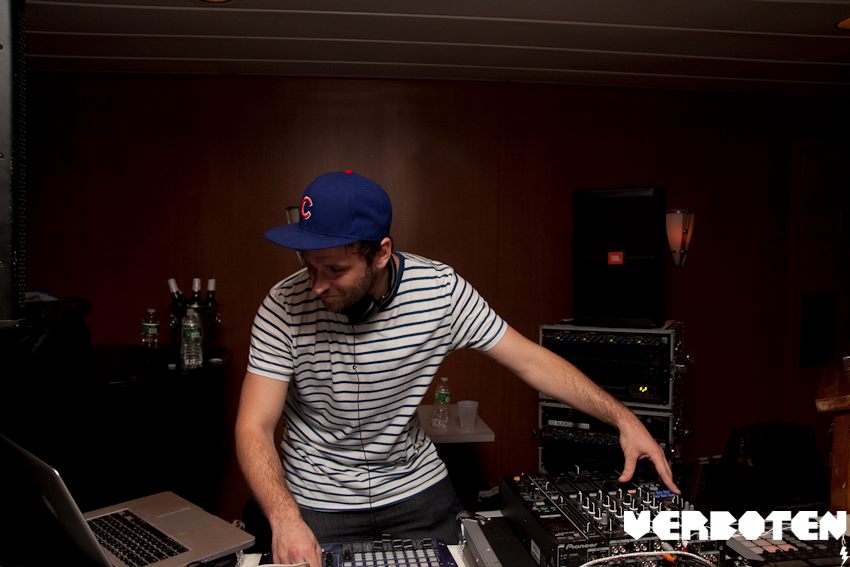 Guti is a musician before a DJ; something that is a rarity in todays saturated dance music market. An amazingly talented piano player turned producer, Guti was quickly snagged by Loco Dice’s Desolat camp and turned into a recognizable name in the underground niche. Having been supported by big names like Marco Carola, Carl Cox and Ricardo Villalobos, Guti wasÂ commissionedÂ to do the coveted Essential Mix by Pete Tong (posted below), and decided to do somethingÂ unprecedented: use only his own tracks in the mix. This along with his live playing style and unique musical background have brought him to the forefront of the scene. As he opened the night at an amazing yacht party featuring Guy Gerber and Lee Curtiss (Visionquest) thrown by NYC’s favorite underground party outfit Verboten, it is pretty easy to tell why he has become a big name. Read on to hear about his relationship with Loco Dice and Martin Buttrich, what he thinks of New York, and what it was like to do the Essential Mix.

“Dice is the boss. Dice put me on the spot. I toured the world for two years with him. I learned how to play for 7,000 people with Dice. He taught me how to face a big crowd and feel like you are in the living room of your own house”

-Guti on his relationship with Loco Dice

JB:Â First and foremost, how do you like playing for the NY crowd? I know you were here for Electric Zoo a year ago, and you and tINI also came around for the GutINI tour at WIP a few months back.

Guti: It is great to be honest. The states in general are great. For me it is important for me to play in city where there is a Latin community present. Like in Chicago, it was amazing. In Miami and New York, it is not home but it feels a bit like home.

JB:Â I know you are a studio trained musician and very into jazz. What was the initial catalyst that moved you from being an extremely talented jazz pianist to making techno?

Guti: For me, it is a totally different world. I liked listening to the guys that would mix house with jazz and latin music. Ricardo, Dice, Luciano… Many other artists as well were doing something more organic. My first time listening I was attracted to it. I could put my music expertise and my life and my background into something new. And it has been a really fun 5 years.

JB:Â What was it like to have Pete Tong ask you to do the essential mix? Did it kind of come out of nowhere, or did you know he was a fan of your productions?

Guti: He started playing my songs in his show. And I was a bit brave because I am not a DJ so it was really my first DJ mix. My first DJ mix should not be an Essential Mix. So I just played two hours of my own music. A lot of people told me to not do it, but it came out really good. And I am really happy about it. It was also a way for me to play some songs that might have been forgotten on my hard-drive. Songs that usually I don’t play. It was massive.

JB:Â I know you are in the Artista Alife family with Loco and Martin and tINI and that whole gang, but I will ask anyway. What has been your favorite collaboration to date?

Guti: So difficult to answer. I see myself still as a musician. A few days ago I was in the studio with Dennis Ferrer, and it was just amazing. Live drums, and room to think. Then I did an amazingÂ collaborationÂ with Livio & Roby and we did it in Marco Carola’s studio. It was crazy, it was like a museum. Marco is so cool, he let us use everything. Some things I have done with Guy (Gerber) are amazing. I love to work with my friends. EveryÂ collaborationÂ has a story behind it. Everyone makes music a different way.

JB:Â Have people like Loco Dice and Martin Buttrich been big mentors for you, or have they kind of let you do your own thing and lead your own path?

Guti: I have two totally different relationships with both. Martin is more like a colleague. He has so much experience, and he is always giving me valuable info. Dice is the boss. Dice put me on the spot. I toured the world for two years with him. I learned how to play for 7,000 people with Dice. He taught me how to face a big crowd and feel like you are in the living room of your own house. So from each artist I take different musical things.

JB:Â Â It seems like whenever you play festivals and clubs, you are playing â€œliveâ€. What does that mean exactly? Are you using Ableton and a bunch of midi controllers?

Guti: It depends on where I play. Sometimes I have to limit myself to the real DJ world. So i run a Maschine as an MPC like I showed you before, as a drum machine. Then I control thousands of tracks with Ableton. Then I play keyboards. So it is getting really dynamic and I am lucky that I play a lot. So I get the chance to try things out. I have made a song at 6 PM, and then I play it for 5,000 people at night, so thats pretty cool. It is kind of like piano. I started to get good at piano after 15 years. Now after 5 years of doing this, I am starting to get good with the skills.

JB:Â You have had tons of big names like Marco Carola, Ricardo Villalobos and Carl Cox support your tracks. What name has stuck out and who were you most honored to receive praise from?

Guti: Carl Cox is just so big. He is amazing. He really likes my music, so this changed my game a little bit. Carl named me as a breakthrough artist of 2011. He makes me really happy, and he always asks for my songs. You can be a big and beautiful person. It is always a good lesson!

I spent this weekend down by the Jersey shore and my buddy, Skidz, wouldn’t stop playing this tune on repeat the whole time we…