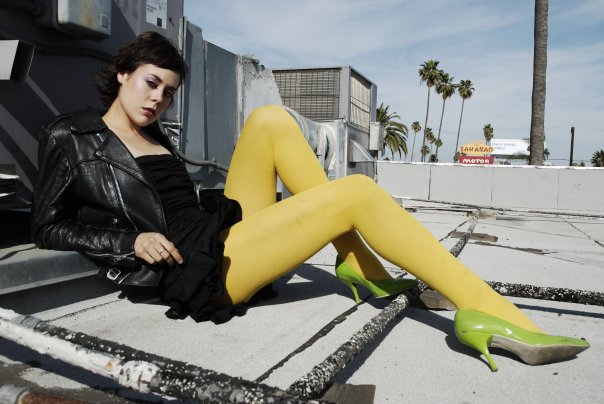 Get familiar with this name: Louisahhh!!!. Yes people, get very familiar and prepare to see a lot more of her unique and in-your-face moniker. Not only is she an amazing DJ and producer, but she is also a stunning vocalist, and as you will soon find out from this interview, quite the intellectual. She has released hits with the French techno titan Brodinski on his newly formed and wildly successful label Bromance Records. Both ‘Let The Beat Control Your Body’ and ‘Nobody Rules The Streets’Â Â showcased her brilliant and diverse vocal abilities. She has also put out a track on arguably the most widely respected underground label at the moment, Hot Creations, with the promising Danny Daze. ‘Your Everything’ was rinsed by literally everyone, and you could not walk into a club in Ibiza last season without hearing it. Intrigued? Read more to find out about her budding relationship with Brodinski and Gessafelstein, what kind of music she is into at the moment, and who would DJ at her ideal party. Also, check out her amazing Bromance Summer Mixtape below, further demonstrating that she is indeed the ‘First Lady’ of this new powerhouse label.

“I think that there are some amazing women doing amazing work that is as good, if not better, than many of their male counterparts. Â Similarly, there are a lot of terrible female DJs, but there are a lot of dudes who are bad at DJing too. Â I want to focus not so much on the advantages or disadvantages of being a woman in this game, but what kind of difference gender lends to what we play and what we make. “

JB: First and foremost, how’d you get started in the whole dance music thing. We’re you a producer or DJ, and how did it evolve from there? We’re you a vocalist first?

Louisahhh:Â Growing up in New York City I was always a musician, I played piano and guitar, taking lessons and being in bands from a pretty young age. I always got really bad anxiety when it came to performing, though. When I started to go out and explore nightlife for the first time in my teens, I had a lot of friends who were DJs and promoters and it seemed really feasible. It started out just playing songs in shitty bars for friends…I got this awesomely terrible Numark CDJ/mixer combo thing and practiced obsessively.

Vocals happened almost accidentally, first with Danny Daze and then with the encouragement of Louis (Brodi). It’s only been in the last 18 months or so that I’ve started to take it seriously and step up to the plate as a singer, really want to hone that and focus on it, get better and braver with my voice. Production has been a trip, too, both as a solo artist and in collaboration with Stevie Be as NYCPARTYINFO. So, to answer your question, I don’t know but I really love dance music.

JB: I’ve recently interviewed some big female DJs like tINI and Magda. What do you think of the female DJ demographic. Will we see some growth in the coming years?

Louisahhh:Â It’s interesting, being asked questions about women in dance music…the ladies that you mentioned, along with people like Nina Kraviz, Heidi, Steffi, Maya Jane Coles – they are people I really look up to as artists, not just as women. It’s kind of a double edged sword, this conversation of gender. On one hand, it’s pretty insulting to hear repeatedly (often with some shock and awe), ‘you’re really good for a girl!’ , like ‘your black friend speaks so well!’, as if my sex is a disadvantage in this business, or I’ve been relying on sex appeal or something (as opposed to hard work and dedication) in order to succeed.

On the other hand, it is with some shame that I watch myself judge other female DJs in this same way, have a lot of contempt for ladies that I watch get booked based on the fact that they have tits and downloaded Serato – they can get away with a lot more than boys can because of the novelty of being a girl in a male-dominated industry. It’s a complicated thing. Bottom line, I think that there are some amazing women doing amazing work that is as good, if not better, than many of their male counterparts. Similarly, there are a lot of terrible female DJs, but there are a lot of dudes who are bad at DJing too. I want to focus not so much on the advantages or disadvantages of being a woman in this game, but what kind of difference gender lends to what we play and what we make. Where femininity delivers a different feel, a subtlety, a tenderness to the work. Let’s talk about that, not whether Paris Hilton is a ‘real DJ’. I mean she’s not, obviously. But Miss Kitten is, so that’s cool.

JB: What is your affiliation with the Bromance boys? How did the great relationship between you and Brodinski and Gessafelstein come to be?

Louisahhh:Â I met Louis at Winter Music Conference in 2010, I think? He had heard a track I did with Senor Stereo called ‘I am the Beat’ and approached me about doing a vocal collaboration. I kept telling him ‘I’m not a singer, blah blah blah’ because I didn’t want to be known as a singer, I wanted to be a REAL PRODUCER and a DJ, not just some girl who did vocals. He kept pushing at it, meanwhile ‘Your Everything’ with Danny Daze came out and was getting more attention, to the point that I couldn’t really deny the role of vocalist any longer.

When he sent me ‘Let the Beat Control Your Body’, it felt like a divine thing, like the words were waiting for me to say them, like a prayer. I couldn’t resist this path anymore. Secretly, being a singer is something I’ve dreamed of since I was a little kid, but never had the guts to do – something I wanted so much that I tried to snuff it out for fear of failing at it or it being a joke. It was pointed out to me that when we have a talent or a passion and we don’t do it, it’s selfish and small. Do you want to live out of fear or out of Love? The latter, please, undoubtedly, even though it’s more terrifying and challenging than anything else.

I think Bromance really encourages that, really nurtures authentic Truth of it’s arists. Gesaffelstein’s work is clear evidence of this – it’s super uncompromising. Club Cheval and Pipes, too – the releases have all been big and tough and a little weird, but unwaveringly honest work. I like to think, or I really hope this is the case, anyway.

JB: Who are you into at the moment? Who is making exciting and worthwhile dance music?

Louisahhh: This is a funny use of the word ‘worthwhile’. Like, I want to be all ‘if you’re making something, it’s TOTALLY worthwhile, go on with your bad self!’ while the reality is I delete 75% of the promos I am sent without listening to them because hard drive space is a commodity and apparently I deem them decidedly un-worthwhile. To actually answer your question (I seem to have been going on a lot of sensitive tangents about the nature of art, sorry), what I’m excited about right now is a lot of the new French techno. Obviously, Bromance, but also Marble and Sound Pellegrino – the new Todd Edwards and Surkin collaborations have been mind blowing, in addition to Para One’s ‘Passion’, which I guess is more of a pop album. Also Boys Noize and DirtyBird have been putting out amazing stuff. On the deeper tip, I love Cecille, Hot Creations, Throne of Blood. There is a ton of very ‘worthwhile’ music right now, it’s a pretty thrilling time to be making and playing music.

JB: I know your style spans many genres. You have produced a deep house mega hit “Your Everything” with Danny Daze, and you have also made a banging techno track “Nobody Rules The Streets” with Brodinski. What is your preference and how does it shape your DJ sets?

Louisahhh: I want to play hard and deep, tough and tender. I love the melodic and melancholy stuff, but I also am drawn to more ferocious techno and recently, less straight 4/4 rhythms – the influence of old school electro and more modern trap music on new techno and deep house is a really interesting place to be right now. My goal is to play a set that is a journey between these lines, so that it’s not so much a genre that defines the set as a feeling.

JB: What’s next for you? Are you going to put out some solo stuff on Bromance?

Louisahhh: There is a lot of stuff in the works! A bunch of collaborations and original tracks, some of them featured on the Bromance Summer Mix, are either coming out or looking for appropriate labels. Definitely a solo release on Bromance, hopefully in autumn. My collaboration with Stevie Be (who is also part of Pipes), NYCPARTYINFO, has an EP coming out on Throne of Blood in September that I am thrilled about. Also, more and more singing…stay tuned!

JB: Who would play at your ideal party (opener and main act)? For me it would be Boys Noize opening up for Loco Dice / Marco carola B2B… How Long would the sets be and what venue would it be at?

Louisahhh:Â I would say Richy Ahmed and Maceo Plex playing back to back, followed by a live set from Aquarius Heaven, then Nina Kraviz and Levon Vincent tag teaming, then Jacques Lu Cont, then Tiga in 2005, then Soulwax live, all playing in a big dirty sweaty warehouse with a miraculously clean swimming pool and a floor made of trampoline where you can smoke indoors so as to not disturb the herd of winged unicorns that graze outside.

JB: With regards to the massive influx of dance music fans and meteoric rise in the popularity of dance music, do u think there will be a spillover into the more underground/ deep stuff? Or will the kids forever love their david Guetta and Avicii?

Louisahhh:I think America especially is just discovering itself as a consumer of dance music, or ‘EDM, LOL’ on a mainstream level. I can’t be mad at it – David Guetta makes amazing pop songs and makes what I play more palatable to more people. There is no such thing as selling out unless one compromises the integrity of the work. Getting popular is not necessarily selling out, it is making a living doing what you do. I don’t think we can get too precious about ‘the underground’. If you’re mad that a frat boy shows up at your warehouse party and requests Avicii, you need to be digging deeper – stick to your guns and show this guy something really weird and magical.

As dance music becomes more widely known (again, this is more applicable in the USA), it is our duty as producers and DJs to educate and elevate the crowd, to challenge ourselves and our audience no matter what context we are playing in. Similarly, I implore fans who are new to this world to remain open minded and become seekers. Investigate the roots of what you love. This is uncharted territory for us as a culture, we need not bastardize it by hating on anything that’s recognized as popular by a wider audience. PLUR, c’mon.

NIce new trancy remix from Sied van Riel. He hasn’t produced that many new remixes this year, but this one has a cool Armin…