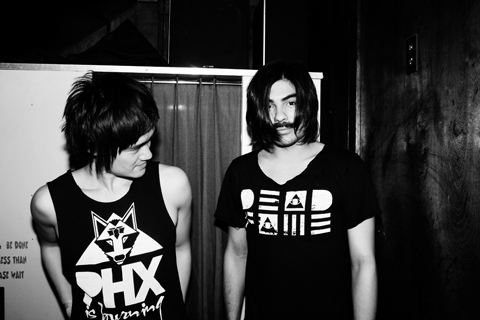 Midnight Conspiracy, the Chicago based electro-dub step-house rockers are quickly becoming a name among electronic music fans. Having toured all over the country making stops at Ultra Music Festival, Lalapalozza, and Hard Festival, Louis and Mikul made it back to Webster Hall for the second time this year. With their recent releases ‘The Eye’ and ‘Discord’ along with their energetic live sets it is no wonder they are making a name for themselves among packed crowds across the country. We got a chance to sit down with them to ask them a few questions.

Check out our interview and a recap video from the night after the jump! And if you missed our review of the night make sure to check it out here!

Electronica Oasis: How has your tour been so far? We’ve seen you been all over the country including Lalapallooza, Ultra, etc. what are some of the highlights?

Midnight Conspiracy: I’d say the buffet spread and endless coconut water at Lollapalooza beat out the food at Ultra. Though, camping out in the mountains of Ontario, Canada for WEMF (World Electronic Music Festival) upped our apocalyptic survival skills.

EO: Now having played a few shows here in New York, how does the crowd compare to Chicago?

MC: We crowd surfed and people put their hands up and flashed their “Eyes in the sky” during our song ‘The Eye’, so they know the drill in NYC just like in Chicago.

MC: We threw a lot of underground loft and art parties, did the whole DIY thing when we first started out… you know things like bringing in kiddie pools next to the DJ booth, flooding loft spaces and other debauchery. So when you see us jumping up and down excessively while DJing and getting people overly rowdy at our shows, that’s just what we were used to. Maybe we’ll bring back the kiddie pool.

EO: How did you guys end up meeting?

MC: Louis dated Mikul’s ex-girlfriend and Graham banged one of Mikul’s other girls, I don’t know what you call it, so I guess we all had similar tastes in women.

EO: If you had to explain your live shows to someone how would you describe them?

MC: Mikul broke his nose while crowd surfing at a show so be ready to get roughed up and have some fun.

EO: Are there any plans to bring your Dead Fame parties to any other cities? NYC?

MC: Yeah for sure. Dead Fame consists of Midnight Conspiracy, CENOB1TE and Kris Barman of Innerpartysystem. We’ll be doing a lot of stuff together in 2012.

EO: Are there any new ideas you are planning to add in future shows?

MC: For 2012 we’re working on a more elaborate performance. We’ll be performing out of 16ft custom DJ booth in the shape of our Eye of Providence logo accompanied with a laser lightshow, a narrated
storyline and anything else we can come up with like burlesque metal grinders, sword fights and other random goodness.

EO: We have to ask what’s your affiliation with the Illuiminati. Your recent track ‘The Eye,’ which is currently climbing the Beatport charts, is a popular symbol among the group?

MC: “There is an elite few that rule this world in darkness and in evil. Your leaders are mere puppets in this New World Order…” is an excerpt from our intro. I’d say there is an elite class that pull the strings of the world bringing us perpetual war and filling up the purses of all their buddies, a metaphorical Illuminati per se. With Midnight Conspiracy we’ve created a counter to that, the people’s illuminati where the average man doesn’t have to feel so helpless and it’s ‘The Eye’ that’s watching over this elite class so that we may tear down these tyrants one day when the time is right.

EO: Thanks to the Midnight Conspiracy guys for taking some time to answer our questions and hang out with us for a few. These guys really know how to party and if they’re in your area make sure to check them out!

Make sure to support these guys: Click here to purchase their tracks on Beatport

Want to find out more about Midnight Conpiracy?

Now available for listening on Soundcloud is Tiesto’s remix of Ellie Goulding’s newest single ‘Burn’. With Ellie’s intoxicating vocals from the original song, it…