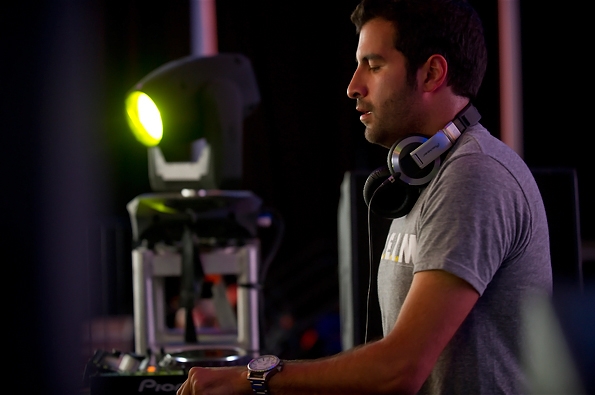 Heralded by many house-heads as the best event of the summer thus far, Danny Tenaglia & John Digweeds co-headlining show on Governor’s Island was nothing short of amazing. The rain held off, the vibe was perfect, the sound was pristine, and the sets were about as good as it gets. It was the flawless synergy between sand, skyline views, and the toughest and techiest house around that made the event (get the pun, Made Event) truly spectacular. Tenaglia’s exclusive edits and jaw-dropping tribal bombs were all notable, and Digweeds signature sound with deep and groovy baselines was on point. If you were lucky enough to get there on the earlier side, you witnessed great music from Pleasurekraft, who set the stage perfectly for the aforementioned kings of the scene. While “setting the stage” Kaveh of Pleasurekraft might have stolen the show. Tracks like ‘Skeleton Key’ ‘Zooloo’ remix and the all-powerful ‘Tarantula’ were the perfect aural compliments to the sun setting. Check out our interview with Pleasurekraft below in which we learn what makes the Pleasurekraft signature sound, what he thinks about the rise of dance music popularity, and what producers to be on the look out for.

“Some of our tracks have a circusy element. But there is always that dark undertone. Its kind of like that circus where the clown is gonna fuck you up. He’s not gonna give you a balloon. If you saw the end of “Zombieland” you know what I mean! “

JB: First and foremost, how do you like playing for the New York crowd? I know this is your first visit of 2012.

Kaveh: I have played here twice before, both times at Cielo. Both were not on weekend nights, so the vibe was a little different. This Governors Island gig is way different, especially playing with 2 legends that I grew up listening to.

JB: After the ‘Tarantula’ release, how hard was it to live up to that hype and continue to put out records of that quality?

Kaveh: Its a bit like Radiohead’s ‘Creep’. A song that broke them, but they never had another track that was as massive commercially even though they had lots of critical acclaim. They hate playing Creep, and in some respects I hate playing Tarantula. But if I am lucky enough to be doing this for the next 10 years, I will be playing Tarantula of course – were it not for that song all the doors that opened for us to do everything we did since then may never have opened. There are expectations on the crowd side, and they always kind of judge everything you do after your biggest hit. For both Kalle and I, Tarantula is not one of our favorite tracks. Everything you put out after a #1 selling track across all genres, you canâ€™t help but compare to that track. When it first came out, the top 10 tracks on Beatport were dominated by tech and minimal tracks, and now its all progressive and electro. Beatport and the scene itself has changed so much since then.

JB: What has, in your opinion, been your biggest accomplishment as producers? What track sticks out for you?

Kaveh: I wouldnâ€™t answer this question with a track. I feel like we have found a niche under the tech house umbrella, and we are not repeating ourselves and still gaining new fans. And that is what I am most proud of. The fact that we are doing our own thing, we are setting our own rules, and luckily the fans are coming along for the ride.

JB: Even during the intro of any Pleasurekraft track, most fans can ID it as your track immediately. How did you cultivate that bouncey signature sound?

Kaveh: Its just something that comes out of us. Some tracks have a circusy element. But there is always that dark undertone. Its kind of like that circus where the clown is gonna fuck you up. Hes not gonna give you a balloon. If you saw the end of “Zombieland” you know what I mean! Its like osmosis when listening to all other genres of music. I think if you listen to producers that are making techno tracks, and they are also listening to other genres that have nothing to do with techno, their tracks are much more interesting as a result.

JB: What has been the best gig of your career thus far?

Kaveh: Mexico City. First time and second time. I donâ€™t know what it is, but they are crazy down there, and itâ€™s the best kind of crazy. Itâ€™s a city of like 50 million people, so you there is automatically a much bigger pool of people to gain fans from as well.

JB: Your music to me seems to be the perfect gap between tech house and progressive house. Was this your intention from the start? Or are you just producing what feels right to you when you get in the studio?

Kaveh: Well I wouldn’t use the term ‘progressive’ really – I think because we have melodies in our tracks which is something you hear a lot in progressive house people might mislabel it and us as that – but what we do is purely tech and house. We kind of start out like â€˜lets see what naturally comes’ but we could go off on a tangent and kind of be like, â€˜how did we arrive hereâ€™. That being said we have a track coming out on Umeks label, and it is a retro housey tune with a string hook. It is definitely not a normal Pleasurekraft song. But once in a while you want to do that track where people are pleasantly surprised as a track is a departure from your normal sound.

JB: How do you feel about the rise of dance music popularity over the last few years?

Kaveh: I think its great. I know a lot of people will say its diluting the good stuff. And bringing in all these people who have no idea whats going on in ‘real’ dance music and donâ€™t appreciate the music blah blah blah. I canâ€™t say they are wrong. However, you could have someone who today could be listening to David Guetta’s album, but in 2 years could be the biggest Dubfire fan. I donâ€™t view it as a negative thing at all. Itâ€™s a gateway thing.

JB: In ‘Tarantula’, who does that vocal and what does it mean? Also, in ‘Carny’, did you use a melody from a real circus or carnival ride? It sounds so authentic.

Kaveh: 2 things: The Tarantula answer, that is just a tiny half second sample that we basically played as an instrument to create that melody. It doesn’t actually SAY anything. Its just a drawn out vowel. The Carny question, it was actually influenced by a Swedish kids program from the 80s.

JB: What’s next for Pleasurekraft? I notice you rarely collaborate, instead choosing to put out originals and remixes. Are you going to work with anyone in the near future? I’d love To see you put something out with Bass Kleph or Alex Kenji.

Kaveh: It depends. The natural artist trajectory that some producers have is different. With Alex, he will do a really sick groove on a tech house track for instance – and then he will come out and make a big accessible progressive track. I know that probably drives some people crazy – but Alex is a great producer who doesn’t feel the need to be restricted by genres and I respect him immensely for that. On the collab tip – we’re doing a track with Jaceo. Another track with Green Velvet as well. And we have a collab with Manuel de la Mare as well.

JB: Who are some producers putting out great dance music right now? Who are you listening to at the moment?

Kaveh: Jaceo, I love a lot of his tracks. I think Darius Syrrosian from Viva is incredible. My favorite thing is techy with a raw urban feel to it. Any tracks that have that urban/raw feel to it and its techy, thatâ€™s my stuff. As a DJ,(and producer) Darius is amazing. He usually opens for Steve Lawler, but people come late just to see Steve and they are missing a great set from Darius. I really like Kink from Bulgaria. His shit is awesome. Format:B is unbelievable. You listen to one of their tracks and you can tell they listen to so much other music besides electronic like classical/jazz/blues.

The best decisionÂ Nicky Romero made was to exchange his drum set for turn tables. With the upcoming release of ‘Solar,’Romero is keeping his presence…