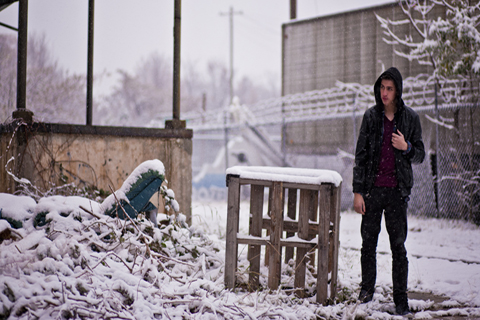 Unlikely doesnâ€™t even begin to describe Porter Robinsonâ€™s rapid ascent to the forefront of the world of dance music. 18-year-old Porter Robinson had never set foot in a club when his smash hit â€œSay My Nameâ€ shot to number one on Beatportâ€™s Electro-House chart, making people do just that on dance floors and DJ booths across the globe. Complex yet catchy, and classic yet cutting edge, Porter Robinsonâ€™s instantly recognizable sound has earned him the raving support of top legendary producers such as Tiesto, Paul Van Dyk, David Guetta, and more.
Porter Robinson – Say My Name (Original Mix)
[audio:http://www.electronicaoasis.com/wp-content/uploads/2011/01/Say My Name (Original Mix).mp3|titles=Say My Name (Original Mix).mp3]
Yolanda Be Cool & Dcup – We No Speak Americano (Porter Robinson Bootleg Mix)
[audio:http://www.electronicaoasis.com/wp-content/uploads/2011/01/We No Speak Americano (Porter Robinson Bootleg Mix).mp3|titles=We No Speak Americano (Porter Robinson Bootleg Mix).mp3]
Spencer & Hill – Less Go! feat. Lil Jon (Porter Robinson Remix)
[audio:http://www.electronicaoasis.com/wp-content/uploads/2011/01/Less Go! feat. Lil Jon (Porter Robinson Remix).mp3|titles=Less Go! feat. Lil Jon (Porter Robinson Remix).mp3]
Porter Robinson is scheduled to play at Webster Hall NYC Friday, February 25th and you can expect all of Electronica Oasis to be there. You can buy tickets here. And now check out this exclusive interview with Porter after the jump (read more!).
EO: Hey Porter, so you’re obviously blowing up in the electro scene and just in case people aren’t aware of you (which they should be), you’re Porter Robinson and we hear you are from Chapel Hill, NC. So, first off. UNC or Duke?
Porter: Is UNC vs. Duke a rivalry that people outside of North Carolina are aware of? I had no idea. Both of my parents went to UNC, so I have to side with the Tar Heels. There’s also a chance that the UNC application board will see this interview, and I didn’t apply to Duke. Word.
EO: Do you plan on going to college or are you looking to venture directly into the music scene full time?
Porter: I’m still trying to figure that out. My decision will depend largely on how this next year goes goes me. So far peoples’ reception of my music has been very good, which bodes well for my future.
EO: High school was a blast, and I wish many times that I could go back. How is it growing up and becoming so popular through this music? Are you turning everyone into electro-heads? Are you the local celebrity in your school?
Porter: High school is pretty cool – it’s like an escape for me. Since becoming popular as a musician, high school has kept me grounded. This is a real advantage of the fact that rural North Carolina high schoolers have no concept of electro music or even a club scene. Some of people who go to my school have a rough idea of the gravity of my accomplishmentsÂ  (“Hey, I saw you’re playing with Moby on New Years Eve!”, “You’re on iTunes!”) and they often stop to tell me that they always see “Porter Robinson is now friends with Mark Moore and 246 other people.” on Facebook. I try to strike a balance with how I’m received at school: On one hand, I enjoy school as a sanctuary, but on the other, I’d rather not have my peers compare me to local high school bands.
EO: You started out producing music at a young age, and by young we mean a pre-teen right? What inspired you most to start producing? What did your first tracks sound like and do you ever go back and take a listen?
Porter: Yeah, I started when I was thirteen or something. My parents gave me a weak sampler keyboard (that I still play to this day), and I wanted to record its output, so I downloaded a really simple loop sequencer called Acid. While I never succeeded in recording my keyboard, getting that program got me involved in the music production community and eventually inspired me to try FL Studio. My old music was really dancey and pure fun – happy 142-BPM hard dance music. I revisit it often, but my new music is way more legit.
EO: Well you definitely have progressed a lot since then. When did you realize that you could make it big time in the electro world?
Porter: When Say my Name was #1 on Beatport’s electro house charts for several consecutive weeks, I started to dream a bit bigger. But by far the most compelling and exciting accolade is recognition from my musical idols. When Wolfgang Gartner followed me on Twitter I was super stoked.
EO: You’ve recently teamed up with Lazy RichÂ to produce the monster track ‘Hello’. How was working with Lazy Rich? How did you two connect and decide that you wanted to do a track together?
Porter: Working with Lazy Rich was a blast. Unlike his music, Rich is incredibly laid back and chill. I connected with him through Eduardo from Dirtyloud. The way I got connected with Dirtyloud is pretty funny – I posted obsessively on their Formspring, interrogating them about their awesome music and eventually asking if we could exchange contact information and chat. The first time I talked to Eduardo, I had no electro releases – “Say My Name” was scheduled to come out in about a week, though, so I sent it to him. He absolutely adored it and proclaimed that Lazy Rich would love it, so he sent it (with my permission) right away.

EO: If you could pick one person to collaborate with on a track, who would be the top person on your list?

Porter: I can’t pick just one. Wolfgang Gartner catalyzed this movement towards hyper-detailed and hard-sounding electro, and I admire his work ethic. Skrillex is enormously successful and an exceptional innovator. Everything Noisia touches turns to gold (listen to Alpha Centauri or Red Heat!). A few more names to drop: my good friend Madeon, Rob Swire from Pendulum, or Robin Brandes AKA Dave Darell.
EO: How was touring in Germany? Any interesting stories?
Porter: Hahah, yeah. First was at the club Himmerich in Monchengladbach. My father traveled with me to this show because I had never traveled internationally before. He came to the club about 30 minutes into the event with a camera because he wanted to get some pictures of my set. But all the German kids in there thought he was the club photographer, so they would walk up to him with a group of buddies and say “photo?” or something like that. Since my dad didn’t speak German, he couldn’t really decline, so he ended up taking several hundred pictures that night. A few days later, I even saw a conversation on the Facebook page for the event where a dude was pissed because the pictures didn’t show up on the website.
EO: What do you use to produce? Any particular hardware or software that you love?
Porter: I use FL Studio. I recommend this program so highly. It generally gets a bad rap because itÂ isn’t unnecessarily esoteric and convoluted, which means it attracts a lot of newbie producers who aren’t good yet. This phenomenon has caused music production elitists to conclude that the program itself is subpar. It’s ludicrous. Don’t subscribe to lofty audio myths. I don’t use any hardware at all. I think approaching hardware in 2010 would be a huge step back.
EO: Do you have any tips/advice/suggestions for young producers?
Porter: The two most important suggestions I have are to work really hard and to have extremely high standards. If you hold those two principles dear, everything else falls into place pretty nicely. Simply don’t proceed into the next part of your song until you’re very happy with what you’ve already made. That’s the high standards part. More complicated is actually making yourself happy with what you made. That’s where the hard work comes in.
EO: What do you have in store for us? Can we look forward to another release soon?
Porter: I’m gonna be a bit hush-hush about it, because I prefer to let management and labels and stuff announce things at their own pace. But one thing that’s already announced is the release of my new single “The Wildcat” on January 7th through Massive 808s/Glamara Records. Also, I just completed a remix for Innerpartysystem and it’s really big sounding. I think people will be way happy with it.
EO: Where do you see the electronic dance music scene in a year from now?
Porter: I think genre barriers are going to dissolve a bit more, and artists and deejays will be more guided by musical attitudes. What I mean by this is that I’d be way way way more excited to see a “banger” DJ than to see a “128 BPM house” DJ. Tempo should be irrelevant now. When Skrillex performs, he plays banger electro tracks, banger dubstep tracks, banger DNB tracks, and banger drumstep tracks. If he confined himself to a single BPM, his set would be worse. I don’t really want to be an electro artist, I want to be a banger artist. I want to make energetic and compelling music and I think tempo has very little to do with that anymore.
EO: Thanks Porter!
Porter: Thank you guys, Electronica Oasis! I dug the questions. Dankness.

As reported yesterday, Swedish piano mat Avicii is coming to Radio City Music Hall. As of 10 a.m. today, presale tickets for the Sept….