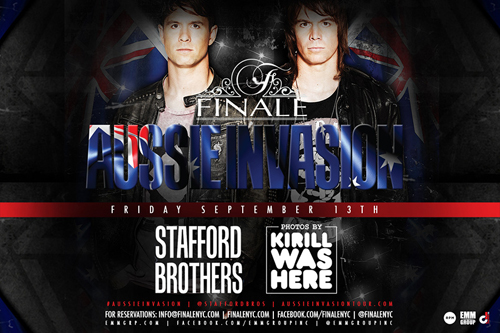 Brothers Chris and Matt Stafford who were just voted as the number one DJs in Australia for a third time have just embarked on sixteen date tour across North America which they are calling the ‘Aussie Invasion’ tour. These two brothers have been having a great year so far being the first EDM artists signed to Cash Money Records, which comes with it’s privileges like recording their hit track ‘Hello’ with hip-hop star Lil Wayne and Christina Milian.

The Stafford Brothers made their second stop on the tour at FinaleNYC on Friday night, where they played many of their hits including their new unreleased single ‘Are Your Ready’ which had the crowd going wild with some help from their Party Kangaroo.

We met up with the Stafford Brothers before their show at Finale and talked about the ‘Aussie Invasion’ tour, evolution radio and being on tour as brothers.

Electronica Oasis: How has the Aussie Invasion tour going since getting on the road?
Stafford Brothers: We had a major flight delay last night so right now we’re on no sleep, last night was the first show on the tour in Winnipeg. We get to the club and are like what’s up and it’s the last night of the club so it was a demolition night, there was only 200 people and we were like why is it only 200 people, they said it was a private party but it was a wild night, Matt end up swinging on a chandelier, we were swinging from drapes and the party kangaroo had a blast. Besides New York i don’t really know the exact dates but San Diego Invention pool party we’re really looking forward to and Dunnkirk should be really sick.

EO: How excited are you for the release of the new single ‘Are You Ready’ ?
SB: We’re really looking forward to playing that tonight along with a bunch of other unreleased stuff. ‘Are You Ready’ is gonna be f**king sick, you like it, it’s a banger, last night ‘Are You Ready’ definitely got the crowd going wild. The reaction every time the crowds loves it, it’s a festival record you know that’s why we made it, Lil Jon said it’s so good for the festivals.

EO: What do you guys think about being on Evolution Radio ?
SB: Mad stoked, I mean we were so happy that was the idea for sure when we started out it was something big, then when we were doing the show you know it was sort of scripted and now if you’ve listened to the show the last couple of weeks it hasn’t been scripted. It has been more of us talking which evolution radio said was good because you guys have such personalities which is better than whatever other guy is doing. Now we’re just like talking which is a lot more fun and talking about the artists and stories we have with them and obviously being on that stage is huge for America, evolution is really growing.

EO: What’s it like being on tour with your brother?
SB: Hahahaha it’s good it works, its good having somebody your close with I wouldn’t have it any other way. A lot DJs that are solo are like I wish I had somebody with me rather than just a tour manager or something, yea the two of us are great and we obviously have this Kangaroo that comes with us, he doesn’t talk but he’s company and we know him from back home.

EO: How’s the scene in Australia with all these break through artists?
SB: It’s popped like just this year like this thing called Future music festival and the other three major festivals but just this year now out of the those big four there’s only two that go on now. Because there was like twenty festivals and its was just too much, you see all the people around here dressed in the fluro rave gear we were doing that like five or six years ago over in Australia. We own a few night clubs in our town but then the festivals took off and now like all the clubs are coming back, there’s a festival every month basically.

EO: How are you enjoying your residency in Vegas at Light?
SB: Oh bro it’s insane, it’s been awesome we’re always flying to the east coast it seems that there’s always so much going on over on this side of the country. Vegas though is only like a fifty minute flight from LA so that always good, I love it man Vegas is brilliant I love it there, I’ve got mates that live in Vegas and I’m like i could not live there. No more than two days you’ll do a show Friday night then a pool party Saturday during the day then have to flight out for a show that night, it’s pretty hardcore yea but I love Vegas, it definitely helps the scene.

Check out the Stafford Brothers new single ‘Are You Ready’