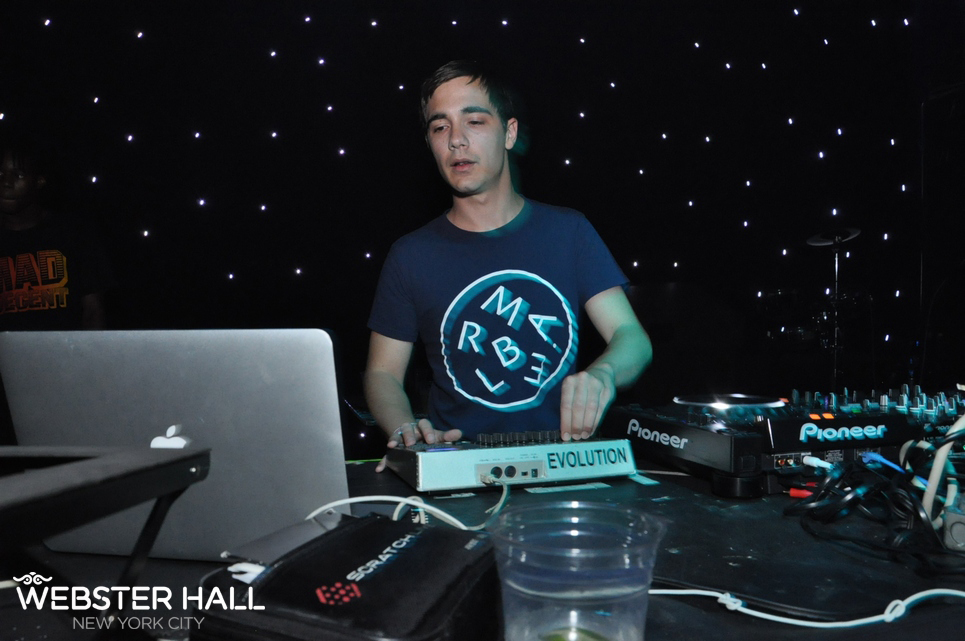 What an intriguing bill last Friday (8/10/12) at Webster Hall. The legend of Surkin began way back in 2007 when I went to my first ever electronic show and was able to see Surkin alongside fellow Marble Records Frenchman, Para One (formerly the head of renowned French label Institubes). I had no idea what I had gotten myself into but I was pretty hooked and my love for electronic music began. Justin and I were lucky enough to catch up with Benoit Heitz (Surkin) and find out a little bit more about someone we’ve longed to see for over five years. As an individual who has spear-headed the forward-thinking French techno movement, Surkin provides valuable insights into the ever-evolving scene. Read on to find out how his label is going, how his sound has evolved, and what his live set up is.

JB+TG: How do you like playing for the New York crowd as opposed to a French crowd, say someplace like the Social Club?

Surkin: Its a bit different but now it’s more of the same, the crowd isn’t all that different anymore because people are listening to a lot of the same music, I love it.

JB+TG: What has been your favorite Marble EP or Single to date?

JB+TG: Are you cultivating any new talent in Marble?

Surkin: We already have seven of us, maybe even eight now ( Bobmo, Canblaster,Das Glow, High Powered Boys, Myd, Para One, Sam Tiba, Surkin), so we’re starting to work on tracks together and there are several EP’s coming out (Canblaster & Riton EP). It’s kind of a big family now so there are a lot of us.

JB+TG: Any big summer festivals coming up? What have you already played?

Surkin: I’ve already played a bunch, Tomorrowland and HARD Summer are two big ones I just played. I did Melt! in July out in Germany. Next we’re headed to Summer Sonic out in Japan, we have a Marble stage out there and everyone from the label will be there which will be pretty awesome.

JB+TG: Whats been a go to track for you in your sets recently?

Surkin: Tough question, right now…probably Bring In The Katz by K.W Griff, I played that tonight, they’ll be releasing that on Night Slugs soon, which is L-Vis 1990’s label.

K.W Griff – Bring In The Katz

JB+TG: What exactly are you doing live when you play? Are you just using Ableton Live and a MIDI controller?

Surkin: I start with an empty set and have a playlist on the side, I’ll drag the tracks in one by one but I’ll play up to three or four at a time. I don’t really have anything planned other than maybe the first two tracks. I know I’m going to play some of my own tracks but I try to play tracks I really like and a few that are mine but I never really know where or when.

JB+TG: How have your label mates influenced your sound?

Surkin: Well we’re in the same building a lot, so we go back and forth and exchange a lot of ideas. I think its really based on the circumstance but we try to bounce ideas off each other.

JB+TG: How do you feel about the recent rise in popularity in dance music? Are you trying to capture the momentum of it or are you still doing your own thing?

Surkin: Well its really in America. In Europe and most of the world, I don’t think there are many changes, but here it has changed a lot. Even in the last year, its so different but I’m happy more people are becoming more interested in that and the mainstream actually helps you to look at different things in electronic music.

JB+TG: How does your album, USA, differ from Next of Kin and other things you’ve been working on like your new EP?

The thing about USA compared to all the stuff im doing, it was more of a concept album, mixed in an FM way. It’s like for radio play. You can’t always play it at clubs, If I was doing the tracks tomorrow, I wouldn’t mix it the same way, it’s really a lot more like a concept album.

John Dahlback sent everyone a Christmas and New Year treat… Atlas! The track is to be released on Mutant Records. Honestly, anything he has…