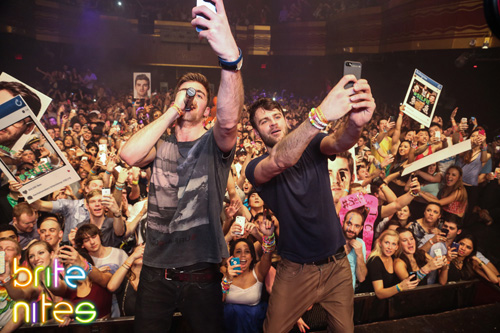 The Chainsmokers are the hottest thing in EDM right now conquering the world with #Selfie, which has well over 1 million views on the music video and currently a Top 10 Beatport spot. They also just released a preview to their remix of Bastille’s ‘Flaws’ yesterday with positive reaction worldwide. Both Alex and Drew went to incredible universities, and put those smarts into their production. Check out our chat with the fellas below!

Electronica Oasis: First of all, congrats on #SELFIE, the Beatport top 10, 1 million + views on the music video, and god knows how many #SELFIE’s with chicks since then. Get ready for some ridiculous, random, and reckless questions.
What is the craziest #SELFIE you’ve ever taken?
The Chainsmokers: The best #SELFIE was at Webster Hall so far about 2000k ppl squeezed into it… but the craziest one we have taken was while having sex with a girl from the back… we kept it within the group…

EO: Would you guys rather be president or DJ MAG’s number 1 DJ?
CS:President in a heartbeat.

EO: What’s your favorite club?
CS: Would have to be Create in LA or Webster in NYC

EO: Teenage crowd or club crowd?
CS: Teenage Crowd knows how to party, Clubs are fun but we are there to get weird and interact…

EO: Do girls now ask you guys out on dates?
CS: Nope neither of us have been asked out as a result of this… Dang we suck…

EO: Favorite drink at the club?
CS: Shots of Fireball….

EO: Burrito or Burger?
CS: Burger, we live for them…

Want to find out more about The Chainsmokers?

What EDM has accomplished in New York in the past few years really is something else. On Saturday night, R3hab, arguably one of the…