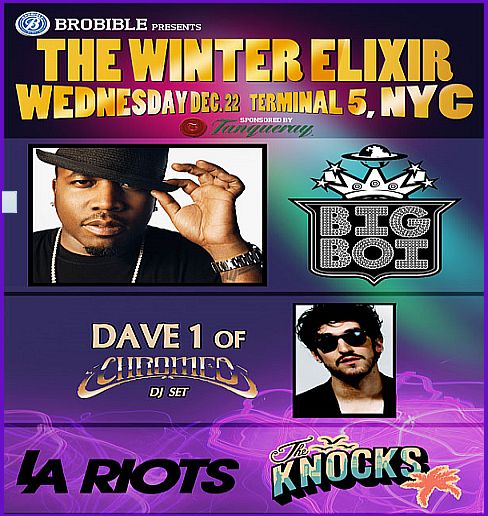 If you listen to dance music and haven’t heard of The Knocks, what the hell are you doing? These guys rock and have just played at the Brooklyn Electronic Music Festival, and will now be playing a set at the BroBible Winter Elixir alongside LA Riots, Dave 1 of Chromeo (kinda sucks Calvin Harris had to bail), and hip hop legend Big Boi. Although they were probably extremely busy preparing their set for the show tomorrow night, they were nice enough to answer some questions for us. What interesting dudes! And their live show is unique as hell. Grab some tickets and check out their music below. Also, be sure to read the interview after the jump (read more).

EO: First and foremost, what are your full names and where are you guys from?

The Knocks: James Patterson aka JPatt from Connecticut and Ben Ruttner aka B-Roc from New Hampshire.

EO: What is it like working on the Lower East Side and are you influenced at all by some of the other electronic music that comes out of the City?

The Knocks: The LES is great for working because there is a strong creative community to draw inspiration from. The LES electronic scene is cool, but I wouldn’t say that we’re super influenced by it.

EO: Where did you guys initially draw influences from?

The Knocks: We’re influenced by a little bit of everything. We try to take cues from other genres so we don’t completely pigeon hole ourselves.

EO: Who would your dream collaboration be with and what would it sound like?

The Knocks: We would love to collaborate with the remaining members of P-Funk. It would sound like the sickest soul electric laser star trek phased out funkatronic awesomeness.

EO: What is your studio set up like? What kind of software and hardware do you guys use? What’s your favorite plug-in?

The Knocks: We use ProTools and Ableton, our computer is ancient and that’s where our janky gritty funk vibe derives from. Our favorite plugin in is the “jay cee oh” setting on guitar rig 3…it shreds.

EO: What is your live setup like? I have seen you guys live before and it was nothing like a DJ set. What exactly is going on up there?

The Knocks: I, JPatt am singing and dancing amidst a forest of cables, pedals and plugs while simultaneously playing synths through a midi controller. Meanwhile, Ben navigates through and is surrounded by multiple samplers which he uses to play different parts of the tracks that we’ve omitted. He also dances. There’s also a backing track that plays the drums and some instruments that we are unable to play live. I occasionally rip on the talk box.

EO: How has your sound evolved between ‘Make It Better’ and ‘Dancing With The DJ’? Where do you see your sound going a few years down the road?

The Knocks: Our sound evolves with every song we make because it feels like were always improving and raising the bar for ourselves. We still try to keep that somethin’ somethin’ in there that makes it “Knocksish”. Who knows maybe we’ll end up making a backpack rap album in a year or so .

EO: Do you guys get more fulfillment from a successful remix or an original track?

The Knocks: Definitely an original track. A remix is still someone else’s song at the end of the day.

EO: Who are some of your favorite artists right now?

The Knocks: Too many new good artists to name them all… Francis and the Lights and Darwin Deez to name a couple. Also really feeling that girl Katy Perry.

EO: If you could get drunk and shoot the shit with one electronic musician on the scene right now, who would it be and why?

The Knocks: Calvin Harris….he seems like a chill bro.

Out today on Exploited Records, the very talented duo known as the Adana Twins are releasing some serious gold. The title song has already…