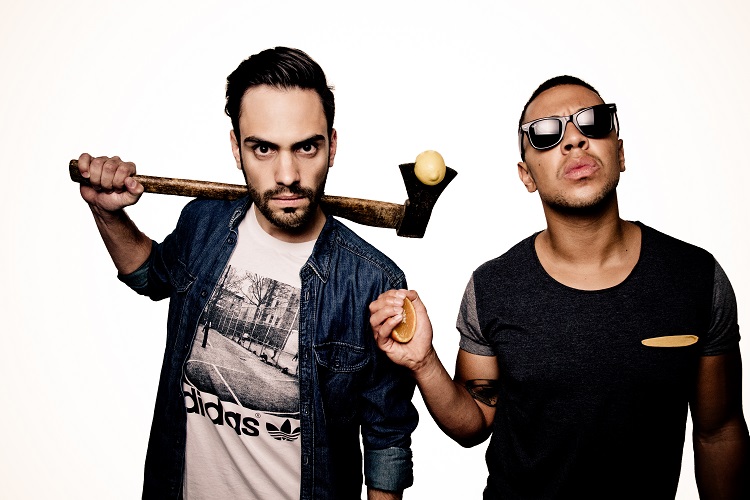 Electronica Oasis: How would you describe your sound to someone that has never heard The Fruityman before?

The Fruityman: When it comes to producing, we really don’t fit into a certain genre. Basically, the Fruityman stands for house music. But we just do whatever we feel like at the moment as long as it is fun and has a certain groove. We are about to finish a tech house song right now. However, a few days earlier, we came up with a trap song after a few beers… But when it comes to our DJ sets, it is all about techy vibes as well as some heavy and rolling basslines!

EO: Why do you call yourself “The Fruityman”?

The Fruityman: We both met during an internship at a radio station. The radio station was located on top of a shopping mall with a huge food court where we used to have our lunch break together. After a while, we started giving those restaurants names. The Chinese restaurant was called “Chinaman”, the Turkish one “Capt’n Turkey” and there was this little fruit booth where you could order fruit salad and fresh juices. So we started calling the guy who was working there “The Fruityman”. He used to talk and sing in a very high voice while he was preparing the food and he always included James Brown moves into his walk when he was in a good mood. So we thought “The Fruityman” would be the perfect name for us. Unfortunately, now we know that our name sounds a little bit stupid on every different continent. But it’s too late to change it…

EO: What are you guys currently working on?
The Fruityman: We are about finishing a tech house song which will be called “Sucka Trashin”. We are also working on a remix for Hozier’s beautiful song “Take me to church”.

EO: What are three tracks right now that you’re playing out that really gets the crowd moving?

EO: Tell us about your new remix for Lykke Li’s “No Rest For The Wicked.
The Fruityman: For some reason that remix went off in Greece. We just can’t explain it. It showed up in several blogs, almost every big radio station plays it and it recently entered the radio charts. We have more and more people from Greece approaching us every day. We love that and we are looking forward to play some DJ sets there next summer.

EO: Any funny stories that you can tell us from gigs?
The Fruityman: One time, we played in a club where they had installed volleyball-sized disco balls (with those many little mirrors) directly over the DJ booth. Eventually, one of the guests was so happy that we played his favourite track that he actually jumped up and hit one of the disco balls like a volleyball. That thing came loose, landed directly in Timm’s face, cut him open and dropped on one of the CD players so that the music stopped playing. So we had complete silence in the club, one fan with the greatest shock of his live, and a DJ with a bloody lip moaning in pain… Disturbing and funny at the same time!

EO: Favorite thing to do (Not music related)
The Fruityman: Food (we are always looking for the best chicken wings in town) and we love to discuss about details and topics that have no relevance at all.

EO: If you could play at any festival which would it be?
The Fruityman: We would love to play on any festival where Laidback Luke sets up his “Super You&Me” stage, so we can finally dress up as Starsky & Hutch or AC/DC!

Wakeup call! Hardwell got me going this morning by posting on his Facebook that a bootleg of his Avicii – Levels mix is now…