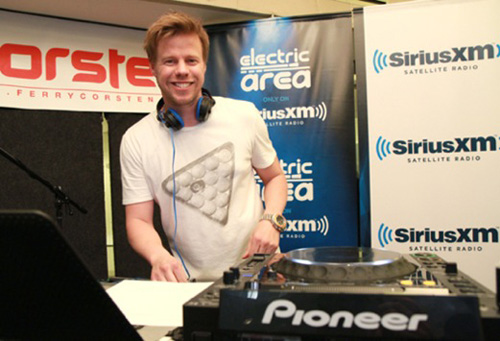 Despite its compact size the “fishbowl” studio located in middle of the hubbub that is SiriusXM radio in midtown NYC buzzed with an air of excitement during Ferry Corsten’s honorary eight hour residency.

To celebrate 250 Corsten’s Countdowns, the gracious Dutch trance producer stood proud above his decks for an attention grabbing marathon daytime set. Surrounded by fans, supporters and Electric Area radio hosts, Ferry joked and spun his way through the day, never once taking a seat to rest. For Ferry however this way clearly not a chore, but rather a joy and honor be hosting this memorable event right in the heart of NYC, in the offices of what is arguably the most influential dance music station in the US.

Spanning decades, genres and continents Ferry played the best of the best from his 250 weekly countdowns. With requests taken for first seven hours from all of his fans, Ferry humbly let those listening take command. For the final hour, he put on the top 10 tracks from the day overall, chosen by fans. Of course all of the choices were euphoric and dance inducing, but the top three took the cake (of which there was a lot in the studio!) Number three was Ferry’s bootleg mix of BT – The Force Of Gravity, followed by his track with Betsie Larkin ‘Made Of Love,’ which trended not once but twice on Twitter during the day. Then, in an ode to classic trance royalty, the listeners chose Markus Schulz vs. Ferry Corsten – Loops & Things, which the unstoppable duo created in Miami a few short weeks ago, and enjoyed its world wide debut earlier in the day.

A natural on the mic ferry entertained shout outs from fellow producers including Markus Schultz (twice!) W&W, Jacob van Hage and more. Seamlessly engaging with those in the room and those listening from 50 countries world wide, it was clear that he truly and utterly loves his chosen profession. Giving thanks to those in attendance he said “you’re not 15,000, but you’re great!!”

With shouts of “Ferry, Ferry” periodically erupting and vocalist Betsie Larkin joining in for the first rendition of ‘Made Of Love,’ the atmosphere was jovial and the unplanned moments only added to the spirit of celebration. And then,even after eight hours endlessly playing music, Ferry then took the time to pose with every single fan, in a sign of true classiness and appreciation.

The countdown will be replayed at http://live.corstenscountdown.com/ so stay tuned for your chance to listen in again if you missed even a minute of Ferry’s eight hours broadcasting live from high above the crowded streets of NYC. Also, don’t forget to enter to win tickets to see Ferry tomorrow at Pacha NYC!

Get Heard With Indaba Music (Contest #3)

Producers, it’s Indaba time! If you’re not familiar with our Indaba Music contests then you should really read more. It is our quarterly contest…