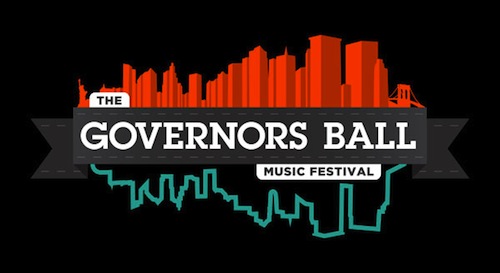 The countdown to the 2012 edition of Governor’s Ball is quickly winding down and with less than a week to go, it’s time to shine a spotlight on what each day has to offer. But first, be sure to check out festival basics below.

To start off, Governor’s Ball has just released the daily schedules and festival map. Make sure you take a look at those before the festival so you can plan your weekend. Be sure to also keep an eye out for the official Governor’s Ball smart phone app, due out on Thursday. If you haven’t bought your ticket for the event yet, grab them here before they sell out!

Drink plenty of water throughout the day! There will be four free filtered water stations at the festival courtesy of Camelbak so make sure to utilize them! Bring a reusable bottle/hydration pack, or buy a limited edition Governor’s Ball Camelbak water bottle at the venue.

Governor’s Ball takes place on Randall’s Island and they’ve offering a bunch of travel packages including ferries and shuttles to get you there. Check them out HERE.

This year, there will be a plethora of activities (aside from the main attraction of course: the music) for people of all ages to enjoy while at the festival. Make sure to check out the many delicious local NYC food trucks such as Luke’s Lobster, Wafels & Dinges, and more! There will also be a Silent Disco; ping pong tables throughout the festival; lawn games like bocce, cornhole, croquet, and ladder ball; beer pong; and photo/video booth courtesy of The Bosco; and a photo booth courtesy of Honda (with a chance to win a car!!). Check out all the details HERE.

Saturday’s lineup focuses more on EDM and hip hop featuring artists such as headliners Passion Pit, and superstars such as Kid Cudi, Atmosphere, and Chromeo. Check out our guide to Saturday after the jump! 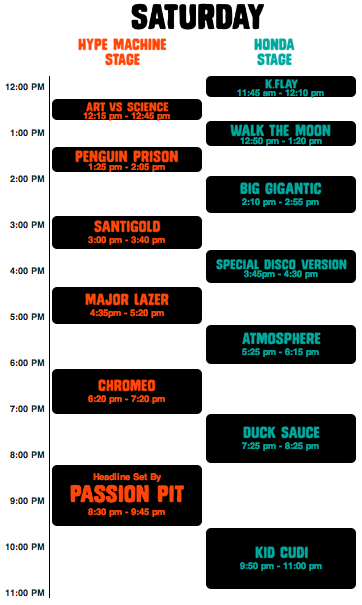 Special Disco Version – Special Disco Version is LCD Soundsystem’s James Murphy and Pat Mahoney. The two spin a live set on vinyl (which is a really a treat when most DJs are using laptops these days) and have been a staple in EDM festivals worldwide since they kicked off the project in 2008. If you’re a fan of disco and obscure dub plates, make sure you catch these guys at the Honda stage!

Duck Sauce – NYC-based Duck Sauce is superstar DJ Armand Van Helden and Fool’s Gold Records co-founder/owner A-Trak. (P.S. Anyone else notice Governor’s Ball seems to be a Fool’s Gold takeover?) The group made it’s claim to fame and took the world by storm after dropping hits like ‘aNYthing’ and ‘Barbra Streisand’ in 2009. They’ve performed at major EDM music festivals such as UMF, Hard Summer, I <3 This City, and more. Be sure to check out these two at the Honda Stage! Big Gigantic – Colorado-based livetronica group Big Gigantic has been making quite a dent in the festival scene Summer, booking sets at Bonnaroo, Lollapalooza, Wakarusa, Hangout, Outside Lands, Austin City Limits, Camp Bisco, and of course Governor’s Ball. Be sure to download their album ‘Nocturnal’ (for free HERE) to get a taste before their set this weekend!

NO ONE – Surprise! Governor’s Ball boasts ‘no overlapping sets’ so you don’t need to worry about missing ANYONE.

When Topher Jones released his hit single ‘Brohammer‘, it not only took everyone by surprise, it eventually became one of the best tracks of…