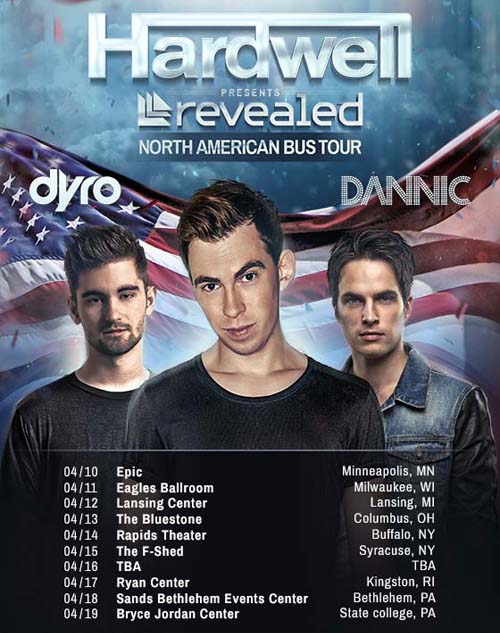 Record label owner, Dutch-house producer, DJ phenomenon, and one of electronic dance music seasoned veterans, Robbert van de Corput started his musical career at the young age of 13, earning a legacy for himself that has far surpassed the achievements of many of his counterparts. As a DJ and producer, with all that the EDM veteran has contributed to the rave community he has surely earned his stripes. Currently ranked #1 in the world by DJ magazines annual top 100 poll, the icon that is Hardwell has spun at some of the most popular electron music festivals, and has two of the most viewed DJ sets on YouTube under his belt from his performances at Tomorrowland in 2012, and Ultra the following year. On top of all of his popularity in 2010, Hardwell started his own record label Revealed Recordings featuring some of the most influential DJs and producers around today including Dyro, Showtek, Dannic, W&W, Alvaro, and Deorro. As well, in addition to his radio show Hardwell On Air, he has also combined forces with legendary EDM producers Tiesto, Nicky Romero and Laidback Luke.

Hardwell kicked of 2013 with his nationwide “Hardwell presents Revealed: Canadian bus tour”, where he was joined on stage with fellow Revealed Recording artist Dyro and Dannic. Which was followed by a nationwide “Go Hardwell or Go Home” tour throughout major cities in the United States. Once again, Hardwell is coming back to the U.S. in April with his Revealed buddies Dannic and Dyro, performing in cities across the country including newly popular DJ stop Syracuse NY, and we’ll be covering it. Hardwell and his Revealed crew will be hosting their show at a personal favorite upstate venue, Syracuse’s own, F Shed at the market on April 15, 2014. Doors will be opening for the show at 7:00 PM with openers Dannic and Dyro coming on at 8:00 PM. Tickets are currently on sale ranging from $35-$75.

But be sure to get your tickets fast or you will surely miss out, as this shows certain to sell out fast.

‘This is Drumcode Live’ – and it’s destination is Pacha NYC. The Techno legend and Drumcode founder, Adam Beyer is making a visit to…