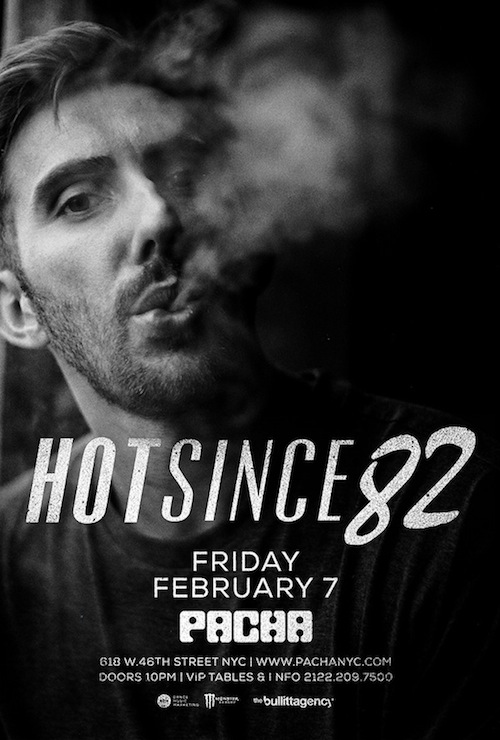 The infamous New York club is home to some of the biggest acts in the EDM scene but has recently spread its wings to explore the deep house realm. Believe it or not, this was my first time at Pacha and oddly enough the same was true for Daley Padley aka Hot Since 82. It’s safe to say we both had a gay ole time.

The VIP area is an awesome aspect of the club. You have the ability to go down into GA or escape to the upper balcony area which is equipped with seating and nice private bathrooms. Speaking of bathrooms, while on the line I just so happened to run into Daley. I was pleasantly surprised that after traveling all over the world, playing at some of the biggest festivals and talking with hundreds of people, this legend remembered me from our interview! So we caught up and chatted for a bit. One of the most humble guys in house music. Nothing but genuine joy from Padley.

Down in the pit of general admission the crowd extensively danced in anticipation for HS82. A personal favorite was when he dropped ‘Ruffline’ by Sidney Charles. The night was filled with funky house grooves from start to finished. A bit more melodic than the Pacha crowd is used to. Daley is known for providing a deep and sometimes dark, soulful vibe. Around 4am he dropped a track from his ‘Knee Deep in 2013 Mix’, ‘Infinity’ by Matthias Meyer.

Pacha’s sound system is quite monstrous and the DJ booth is perfectly placed for all to see. The lighting and effects in the club were very impressive, while the elevated dancers were also easy on the eyes. This was over all a great night of dance filled fun.

An oldie but a goodie gets a fresh coat of pain courtesy of Brazilian producer Henrix. ‘Angel On My Shoulder’ is straight up old…