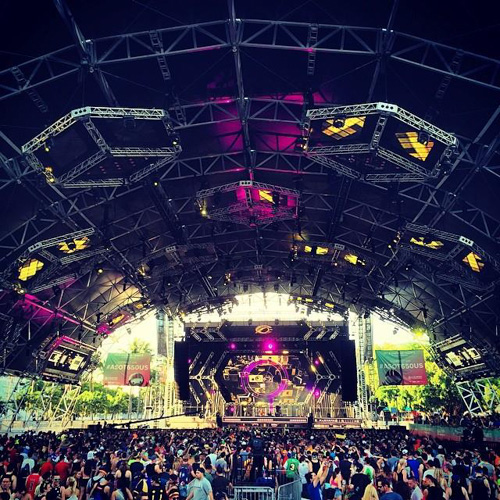 Earlier this week, it was announced that Avicii was in the hospital and had to cancel his Saturday night closing set. This wasn’t the star’s first trip to the hospital, he’s had issues with exhaustion in the past so at first we assumed this was the same. But it turns out the DJ had surgery to remove his gall bladder after complaining of abdominal pain. He’s currently recovering and ready to embark on his US True Tour. Afrojack and Stefan, one half of Dada Life, were also hospitalized this week.

2. deadmau5 fills in for Avicii

After Ultra was left with a major hole in their line-up, it was announced that deadmau5, who recently broke ties with the Ultra label and refused to play shows in Miami, would be filling in. The mau5 appeared donning his usual mau5head and brought his usual swagger, letting out all the stops for a ridiculous and memorable closing set.

A security guard was trampled by festival crashers when fans stormed the chain link fence surrounding the entrance, knocking it down on Erica Mack, a 28-year-old security guard. Mack is in critical, but stable, condition and being treated for head trauma and a broken leg. This type of behavior should not be happening at festivals, especially ones as long-running and well-organized as Ultra, and puts a bad name to everyone involved in the scene.

4. Above & Beyond perform in the rain

A major rainstorm began in the middle of the festival on Saturday night and threatened the ability of the DJs to play. After a short delay, Above & Beyond managed to set up their equipment backstage, facing away from the crowd and sheltered from the rain, and played a spectacular set. The rain only made their outstanding visuals all the more amazing and the lights bouncing off the rain looked like glitter was falling on the crowd. After their set, the rain held off and Armin van Buuren was able to play facing the crowd.

deadmau5 did not disappoint. The Canadian producer and accomplished troll began his Saturday night set with some minimal tech, demonstrating the genre’s slow rise to the mainstream. This was not particularly surprising, considering his recent foray into techno under his pseudonym, testpilot. deadmau5 has always been a bit minimal and experimental, but mostly he’s not afraid to show everyone a good time. This was apparent when he dropped Martin Garrix’s ubiquitous hit ‘Animals’ and replaced that well-known drop with the melody of ‘Old McDonald Had A Farm.’ And the crowd went wild. Whether they were raging in all seriousness or ironically, we will never know. In case you were wondering, the original mix was not created by deadmau5, but McMaNGOS.

Krewella have put out their Valentine’s Day Troll Mix. It’s their 9th mix and they have all been awesome. We live the Krew life,…