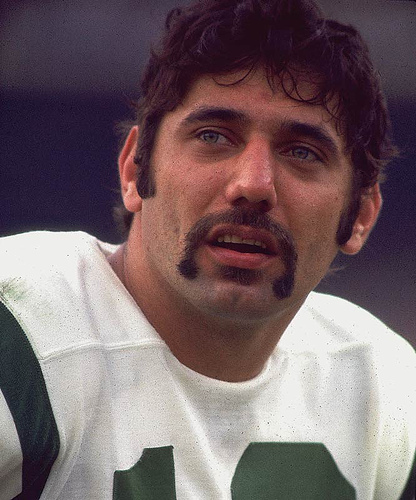 In the spirit of football season Joe Namath’s mustache gets another stint in the limelight. It’s time for volume 4 I’m hoping can keep with its prior volumes but having a Justice song alone may help suffice. It’s been a while so I decided to throw in a sixth song, basically accrued intrest from the break in time from the last post. Note the new pronunciation,gives it a Euro flair.

I Don’t Know What to Do is a perfect track to lead off with. In an earlier mix I featured a remix from The Magician so he’s officially made it as the first two timer and rightfully so. The Magician (Stephen Fasano) is one half of Aeroplane, A deep house electronica group, one that still features Vito De Luca the other half of the original duo. I’m also a real fan of Jeppe, solely because of Classixx incredible remix of I’ll Get You, but the vocals are still pretty awesome. This particular track has one of those incredible synthy bridges that are real trancy.

I Don’t Know What to Do (feat Jeppe) – The Magician

I started listening to Moullinex a while back and always try and keep my eye out for any remixes from the disco house producer from Lisbon. Kamp! is a Polish band definitely worth taking a look at if you’re into this type of music. This is a real funky disco joint with this Polish group’s vocals.

I’ve been meaning to put up one of the many Penguin Prison remixes I’ve heard and decided this Lancelot remix can be its representative. I see nothing but Penguin Prison remixes within this genre of music as the New York City DJ seems to have everyone remixing his tunes. Lancelot is a DJ from Austrailia who released this wild EP teaser two weeks ago. This track has a nice bouncy vibe to it and its a free download.

Bit Funk makes it convenient for any new listener to know what they’re listening to by having his name match his sound. Bit Funk, like Penguin Prison resides in New York, (Brooklyn specifically). Unlike his name, Rap Music doesn’t match in both sound and title. Bit Funk creates a funk disco jam that could have definitely been played in clubs during the 70’s. Also pretty sure the vocal loop comes from Chuck D of Public Enemy.

Body Language, who performed with Teddybears and Alex English last night, I first heard off of a Plastic Plates remix (this one is definitely worth checking out if you haven’t heard it). Falling Out has an awesome intro and that was all I needed to put this up. Golden Touch was basically impossible to find especially because of the bus company. The track has a real nice downtempo dance sound to it

Finally something to talk about with Justice. I really wasn’t blown away with Civilization and then when they released their first new single Audio Video DiscoÂ  I felt a similar level of disappointment. Helix provides some satisfaction. It’s definitely different from something you might hear on Cross but it has that french flair and recognizable progressions which you can only expect Justice to use.