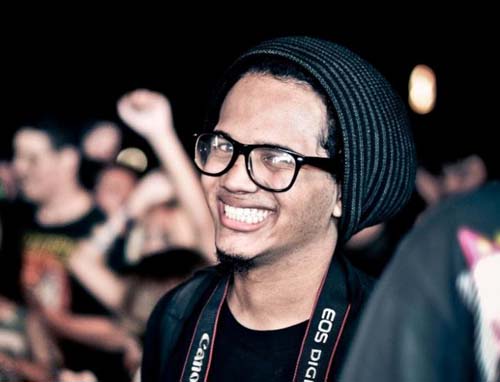 A few weeks back, we held our most recent Indaba Get Heard original mix competition (click here to enter our current competition), and after sifting through hundreds (actually thousands!) of entries, we had chosen Skomaeniac, with his track ‘Virign,’ as the winner of the contest.

Javier â€˜Skomaeniac’ HernÃ¡ndez a native of Carolina, Puerto Rico, (previous winner Double Dust also reside there, more on that later) started mastering his musical abilities at age 14 because according to him, listening to music was not enough. Momoâ€™s Tapas Bar, Club Hype and Red Shield are just a few of the local spots that witnessed his thrilling and highly dynamic performances. After four years of producing, he landed his first full signed double disc album. In March 2012 he won the â€˜MEF Rising Star Contestâ€™, which landed him his first major gig as the opening act for Above & Beyond at Mega Electronic Fest.

Check out the winning track below and after the jump check out our full interview with Javier.

Electronic Oasis: What was the last track you played on your ipod?

Skomaeniac: Addicted (feat. Greg Laswell) by Morgan Page.
The track just reminds me how much i love my girlfriend, that I just can’t stop listening to it..

Electronic Oasis: How did you come up with your DJ/producing name from?

Skomaeniac: Since I was a kid, the Animaniacs were one of my favorite shows in Warner Bros. but it occurred to me to watch tv in the morning and i switched to Discovery Channel & their were some Eskimos on the tv and.. suddenly i started bubbling myself about that name & thinking about the animaniacs when I came to realize, i had the name ‘Skomaniac’ in my head. obviously, it’s written ‘Skomaeniac’ just because I wanted it to look interesting.

Electronic Oasis: Our last Indaba winners Double Dust were from Puerto Rico, is there an explosion of great producers in PR that we don’t know about yet?

Skomaeniac: Double Dust & I started moving around the EDM Scene around the same time, and quite frankly.. I never thought i would cross the same road as them. being the only 3 guys to Produce Progressive House & Trance in our Island is quiet hard for us since the main crowd here in Puerto Rico only listens to Commercial genres. but we won’t lose faith, we know how to make the crowd dance & have a good time too. that’s not really a problem.

Skomaeniac: The scene in our country is extremely divided. if you do not like the commercial stuff, you have problem. if you dont like undergroud music, you should not support anything or visit any place. places where local or international DJ’s can come peform live are pretty nice but some people on our island sometimes like to question everyone !of what is good and what not. other than that, the people that if you love music and enjoy it because you are atodos where events and spend a great time.

Electronic Oasis: Do you guys DJ or just produce music?

Skomaeniac: Well personally, I think that only the 40% of Puerto Rican DJ’s Produce. I myself know which produce and which do not. I prefer that everyone would know how to produce so there could be an equality since when most of the Big events happen in the Island, most of the local talents are simply ‘DJ’s not Producers with DJ abilities.

Electronic Oasis: Who was the first artist that led you into producing and what is it that draws you to trance and progressive?

Skomaeniac: The first artists that led me into producing what it is now Trance, are Above & Beyond. their magical abilities to make every tune wonderful, simply caught my attention and I just couldn’t stop hearing every tune of A&B so i kept hearing & studying other artists developed trance style. suddenly after knowing that there were more than a couple trance dj & producers, I took the time to apply myself to one genre that would certainly suit me and I decided that i would go with Trance & Progressive. I just don’t know why the uplifting piano sounds, the cords of the tunes and the basslines that I hear, make me so addicted to this specific genre. I Guess, is because i’m a very emotional person.

Electronic Oasis: What artist do you find influence your productions?

Electronic Oasis: What would you like to tell our EO readers?

Skomaeniac: It took me more than 4 years to get where I am standing right now. The road to take it ain’t easy but, it’s not impossible. if you love music, if you love sharing & showing what you love, then never stop doing it. don’t ever give up & at the end, you will be satisfied. I’m at a neutral position right now, not even in the big leagues but i’ll do my best, to someday reach the top dogs, like Mat Zo, Arty, Shogun & ofcourse, Mr. Van Buuren!

Electronic Oasis: What is in the pipeline / What can we look out for?

Skomaeniac: Right now i’m currently working on my remix for the track ‘Tell Me If It’s Real’ By Jeanpier Beauchamp which he is also a DJ / Producer of Puerto Rico. also, working on some Tech House / Progressive House / Trance tracks for my plans in 2013 were i’m planning on releasing a few EP’s & then before the year ends, The Big Album!

Electronic Oasis: How has Indaba changed the way you produce music?

Skomaeniac: It has changed a few things actually. like for example, here in my country most of my fans never knew that I submit my track ‘Virgin’ to the contest & that I actually won it. it took them all by surprise, even to my parents who actually support everything i do Musically. All I have to say is that indaba’s page is amazing, is a great way to expose yourself & to let others from around the world know who you are, as an artist, as a singer, as a producer, or even as a remixer. it doesn’t matter what you do, if it fits around music, it’s all good!

A special thanks to all of the entrants to the Indaba music contest, and to Skomaeniac for taking the time to answer our questions. Check out his Facebook, Beatport pages, and keep an ear out for him in the future.

Monstrous new single from Marco V released today through Tao Recordings. Synths on this one will give you goosebumps; combined with some filthy bass…