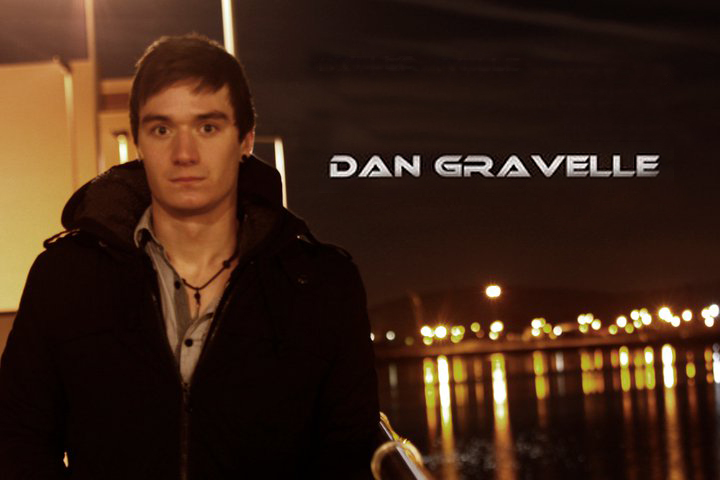 Way back in mid-October we announced our first ever spotlight and interview contest in conjunction with Indaba Music. After a long internal debate, Dan Gravelle’s original track, ‘Far Away’ featuring Vuk Lazar, was crowned champion.

No one here at EO, and likely none of our readers, had any idea who Gravelle was before the contest began, but after one listen to his winning track, it is hard to forget.

The 21 year-old hailing from Swansea, Wales, is currently in his final year of studying computer game design and has been producing for more than 4 years. Aside from producing and gaming, Gravelle also spends time playing canoe polo, which like Dan himself, is something that none of us are familiar with…yet. So now that everyone has finished googleing canoe polo, let’s get to know Dan a little better. Full interview after the jump!

Shikey: Artists don’t always start out in the genre they end up producing in, where are your musical roots and what were you listening to before EDM?

Dan Gravelle: I’m a massive fan of metal/rock music and have been from a young age. Before I began producing electronic music I played in a couple of bands. When I was 15 I was drumming in a punk band with some school friends. That went on for a couple of years, playing a few gigs here and there. Later on I played guitar in a metal band, but all the time was spent writing the music in Guitar Pro, as it never kicked off due to other commitments.

The first time I actually touched on producing electronic music was when I put a guitar riff into a demo of a DAW, just to see what it sounded like as synth! That’s what inspired me to kick-start my ‘Metal2Trance‘ YouTube channel later on.

Shikey: Coming from a hard rock and metal background, what challenges have you found with remixing those kind of tracks with an EDM spin?

DG: It’s not actually as difficult as some people may think. There are a lot of similarites between metal and trance. Lead melodies, chord progressions, basslines, they’re usually around the same bpm and both of them bring out a lot of emotion in the listener. Also, because I’m used to writing guitar riffs and laying out songs in Guitar Pro, it’s easier for me to understand the timing and structure of the notes in the original songs when it comes to laying them down in the synthesizer.

The only thing that bothers me is the fact that it’s almost impossible to find a clean acapella of the vocals, and it leaves my remixes without an essential part of the original song, usually leaving the listener wanting more. That can turn their entire opinion of the remix from good to bad. Though I’m happy with the reaction to the concept of the Metal2Trance channel so far, it’s good to see that there are a lot of open minded people out there.

Shikey: How would you describe your sound? What has been the biggest influence of your music career?

DG: I find it pretty difficult describing my sound. I guess it’s trance, but I try to appeal to the modern commercial music scene, usually resulting in me aiming for a mixture of pretty pads, techy basslines and catchy melodies, meanwhile keeping it around the 128bpm mark. ‘Far Away’ being a prime example of this. I don’t really like labeling my whole sound as I’m always trying new things, which is why I hate the fact that I can’t get rid of that stupid “Trance/House/Progressive” on my Facebook page!

I have to say though that I really try to focus on the melody, which is where I always start writing. Usually I’ll be driving along and randomly start humming or whistling something and think “…… that could work!”.

As for influences, I’m always listening to new electronic music. I fall in love with every annual ‘A State of Trance’ album Armin puts out. Every year I get hooked on the new sounds, and it drives me to up the standard, produce better and be more creative. I guess that’s my biggest influence.

Shikey: Your winning track ‘Far Away’ features the vocals of Vuk Lazar, how did you guys get involved together when separated by the great Atlantic? Did Vuk have a hand in the production as well, or just the vocal track?

DG: We actually met on the Indaba Music website! Roughly this time last year we both came runners up in a competition on the website, and decided to keep in touch. After talking, we soon discovered we both had similar goals and interests in the music scene, and since then we’ve worked on a few things together, ‘Far Away’ being one of them.

I actually finished the track a good while back. It originally had no vocals, but after I set up a remix group on SoundCloud and Vuk heard the track along with two remixes, he felt he had to write up some lyrics and record vocals for it! I was more than happy for him to do so.

Shikey: What was the inspiration behind ‘Far Away’?

DG: I named the track after my girlfriend moved to a different city, it wasn’t that far away, but it felt like it. As for the lyrics, Vuk wrote them, and he says that they do have their own story behind them, but he really wants the listener to have their own interpretation. We believe that this way the track can mean a lot more to the listener.

Shikey: Have you done much DJing? And if so, where was your favorite venue and why?

DG: I haven’t done any DJing yet, except for some mini mixes that I’ve uploaded to the video section of my Facebook page, but they were just done in Virtual DJ with a USB controller, purely to show my favourite tracks at the time. I’d love to DJ live in a club, but I don’t have the equipment or the time at the moment to get it started. When I finish my studies I’m going to make sure that it happens.

Shikey: Who are your favorite producers at the moment? And what would be your dream label to be signed to?

DG: I don’t really have favourite producers, more like favourite tracks from certain producers, but if I had to choose the most consistent producers that always put out great tracks, I’d have to go with the likes of Mat Zo, Gareth Emery, Armin, Dash Berlin, as well as a whole bunch of others. Daniel Kandi amazes me, I love his style. One of my favourite tracks at the moment is his remix of Gareth Emery’s ‘Fight The Sunrise’ with Lucy Saunders.

As for a dream label, I’d have to go with Armada or Anjunabeats. They’re always putting out the best tracks, so to be signed to one of them would be absolutely amazing.

Shikey: Do you have any tips for people just starting to produce? What are your plans in regards to future production?

DG: I can’t stress enough, the best thing I think for anyone just starting is to keep listening to similar music to the genre they want to produce in. I’ve learned so much just from listening to old and new trance tracks. Structure, breakdown and build techniques, melody patterns, mastering, the lot. Maybe try re-creating their favourite track, which is what I’ve done a couple of times. Last year I tried re-creating some parts of Aly & Fila’s remix of Max Graham’s ‘Nothing Else Matters’. I’d lay down the bass track and think something like “Hmmm, the high-end of the bass synth is far too loud and distracting in my version, I should fix that”, then I could apply what I’d learned from that into my original productions.

As soon as you begin producing and get a track down, get it up on SoundCloud and ask for feedback, this will help you progress so much. Don’t be afraid of negative comments, it’s what makes you better as a producer.

Shikey: What should the world know about the future of Dan Gravelle?

DG: I have no idea myself! I’ve been serious about producing for a little over 2 years now, but I haven’t sent off any demos to any labels yet. I’ve just finished a radio edit of ‘Far Away’ so we’re going to be sending off demos pretty soon, along with the original mix and two remixes, then I guess it’s fingers crossed!

I may be studying game design, but my real passion is music. If I could have a career producing music then I’d be the happiest guy alive, but if not, I’ll still be making tracks, adding to the hours and hours of free music I’ve already put up on the internet.

Congrats again to Dan and best of luck in the future! Be on the look out for our next original mix contest…details to come soon!

Today brings a massive release from Dutch production duo Sunnery James & Ryan Marciano. Following up to their hit Tribeca, the team returns with…