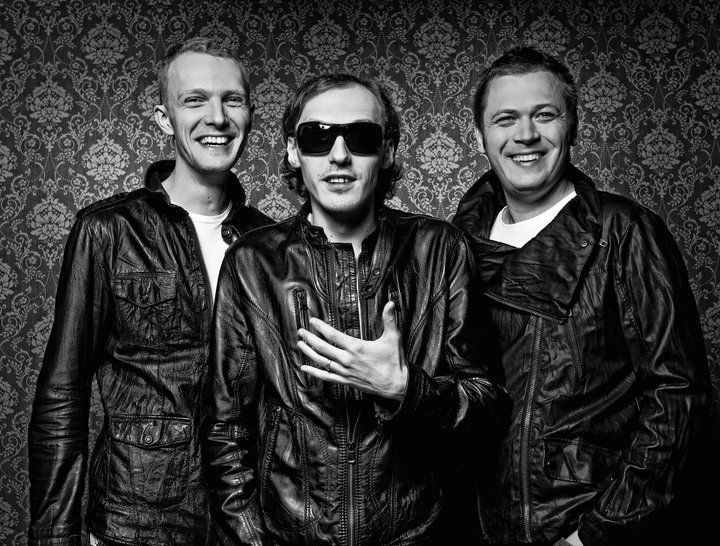 Earlier this fall, Russian DJ trioÂ Swanky TunesÂ finally graced NYC with their presence. The guys have been making music together since 1998 and are now gaining recognition stateside with popular tracks such as Kaskade’s “Eyes” (Swanky Tunes Remix). Â I had the chance to sit down with 2/3 of Swanky Tunes, Vadim Shpak and Stas Zaytsev, prior to their NYC debut and discuss a few things, such asÂ where their favorite venue to play is,Â Â just what exactlyÂ KazantipÂ is, andÂ how they like NYC,Â amongst other topics.

Itâ€™s your first time in NY, how did this gig come to be?

Vadim: We are really happy, because itâ€™s our first time in NY, and we are playing at Provocateur, the most highly, expensive club in NY and in the USA and itâ€™s crazy. Itâ€™s so small and only some people can get in.

Do you think youâ€™re here in NYC now because your music has become increasingly popular?

Vadim: The manager said that when you release remixes, the wave of opportunity is delayed.

Stas: First you have popularity with DJs, after that with the fans and audience, and only after that from the promoters. Thatâ€™s why we need to wait a bit.

Vadim: We already have many things in Russia and Europe and the USA. For example, tonight our third member is playing in Russia and his set is all original.

Stas: It looks like the Swanky Tunes is making money!

What are some of your favorite venues to play?

Stas: About 6 months ago we were atÂ Tomorrowland, which was crazy.

What was so crazy about it?

Vadim: When you see so many people at one time, you feel this energy.

Stas: For me, for example, itâ€™s better to play in the small clubs, when you can have eye contact with your audience, for me thatâ€™s much better. But when you are playing in front of a big crowd, you can sometimes touch them, but itâ€™s another kind of energy.

Vadim: Festivals are very different than the clubs, and clubs have a different feel between small clubs and big clubs. For example, we played Amnesia in Miami and it was 2,000 people but they were very close to us, but we couldnâ€™t touch them because we were up really high. But I did stand on the DJ table and everybody was dancing and I could feel it and I like that. This is different, but I love all kinds of clubs. The most important thing is the club and the atmosphere, for me, big, small anything. Atmosphere is the main thing.

Do you tailor your set based upon how the audience reacts?

Vadim: We generally play the same kind of music, no matter what the venue.

Stas: We know that our music works for big crowds and for small crowds.

Vadim: We can play â€œWe Are Your Friendsâ€ and everyone goes crazy from that track. And thatâ€™s a DJ thing; you can put your inner mind out to everyone. Everyone can understand you and thatâ€™s the main thing about DJing. DJing is not about playing two records and sleeping on the decks; you can put on a commercial track and everyone will understand you and that plays well. Itâ€™s hard to explain what you feel when you are playing and what youâ€™re thinking. You have to see everything that is going on, and how itâ€™s going. This is the main thing; you must think when you are playing and that doesnâ€™t depend on what club you are in.

How do you feel about DJing live sets versus producing?

Vadim: I like both, because if you are trying to produce a track, you finish it and you have this track in your mind and then you go to the club.

Stas: And you try it out on the crowd.

Vadim: So then you can fix something to this track.

Stas: Previously we didnâ€™t play anything produced; some years ago we only played live sets. But that meant we couldnâ€™t feel the reaction of the crowd, because we played only tracks and songs of Swanky Tunes. But when youâ€™re playing tracks from another producers and yours, you can see the true reaction of the audience to your own tracks. Thatâ€™s why we decided to play like DJs.

Did your style of music naturally evolve or did you adapt to the changing music climate?

Vadim: We try to do what we like to do. We understand everything that is going on in the market. For example, we can do something a bit more poppy, but we donâ€™t like it so much. We have another way to do it, we try to make a track that is not so commercial, but it will be commercial when everybody loves it.

Stas: We are trying to straddle a very fine line between underground music and popular music.

Vadim: Itâ€™s interesting because you are doing what you are want, you can put in some elements that you donâ€™t need, but you really love the track, you can then let people decide what its destiny will be.

So, have to say I am very jealous that you went to Kazantip this year. What was it like?

Vadim: Kazantip is a festival that we play every year, in the Ukraine. Itâ€™s a big festival, 17,000 people come over 3 weeks. Every day is a party and we go for 4 days and we do our own party and we record the set we play for others to listen to. Kazantip is something different from American or European festivals. Itâ€™s not such a big crowd, because there are many stages.

Vadim: Every day, different people play on each stage and if you are a visitor you can go from stage to stage over each day. This is a different sort of feel from a festival like Tomorrowland, which is 3 days. Kazantip is 3 weeks and itâ€™s crazy, really really crazy. People sleep everywhere, drink everywhere, and itâ€™s a strange feeling. You wake up, and something is going on right next to you, just as you are waking up. You go to the beach someone is sleeping there. Kazantip is a republic; they have a visa, a president.

Vadim: Itâ€™s like a republic, they have a government; there are ministers of music and of culture. This is interesting, because itâ€™s Russian and held in the Ukraine, it started 19 years ago elsewhere in the area. Be ready for a really crazy festival if you want to goâ€¦ Just be ready because itâ€™s different, Russia and Ukraine is a different culture from America. The people and behavior are different, just be ready if you go!

Stas: Everybody is totally crazy there.

Whatâ€™s your favorite thing about New York since youâ€™ve been here?

Vadim: The biggest city crowd that I have ever seen in my life is in Times Square. Itâ€™s crazy. New York is different from the pictures and we love it.

Stas: All the guys and girls look different from elsewhere in America, but they are so fashionable. Too many girls look like Carrie BradshawÂ  (laughter)

Well we are in Meatpacking, home of Carrie Bradshaw soooâ€¦

Vadim: So many girls look exactly like her (laughter). Girls here donâ€™t wear heels as much, on the streets for example. In Russia you always see girls in heels.

So do you think youâ€™ll come back to NYC soon, you have to!

Vadim: We want to; it would great to have a show somewhere big here. We will be at WMC in Miami coming up.

Do you have any favorite young up and comers?

Tijs Michiel Verwest, better known as Tiesto, has been at the forefront of the dance music scene for over a decade. Throughout his career,…