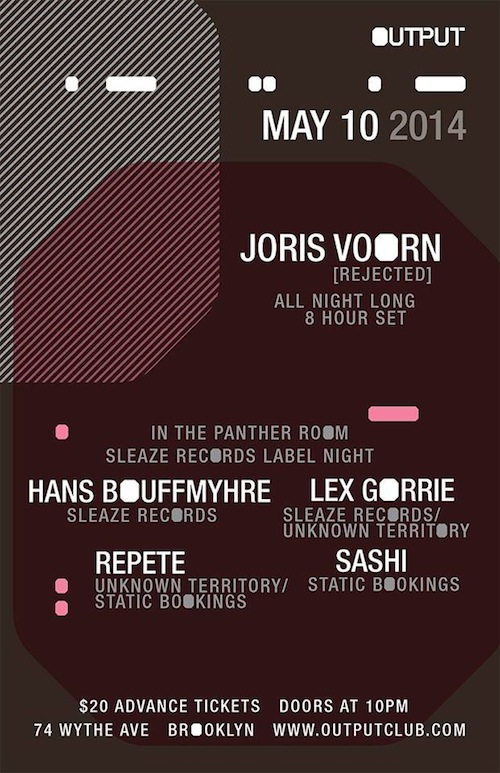 The weather report looked grim for the five boroughs but did anyone care? No! Joris Voorn was back in town for the first time since last September and was set to play an eight hour set at Output! The venue is hot on giving DJs rein over the entire night and for good reason. It allows the DJ to create a mood which takes the listeners and methodical dancers on a ride. I’m a personal fan of this because these guys get to build up the crowd with their own set of tracks instead of the opener doing it for the bouncers and bar staff. Big ups to Output for making this happen for Joris Voorn (and Carl Cox back in April).

When you hear the word ‘rain’ on a Saturday night you begin to create a list of fears in your head…’Will anyone be out?’, ‘Does this outfit work in the rain?’ and most importantly “am I gonna ruin my fresh kicks?’ But lovers of Joris and Output showed no fear as the dance club had a great crowd of party-goers. By midnight the club was packed. The second floor balcony area is where its at if you want to watch the DJ work their magic. There was plenty of space to get moving up there.

Joris was fully prepared to keep the crowd going for eight hours with the funky/deep tracks that kept my feet moving and my hands ‘flicking’. I eventually made my way down to the dance floor to experience the massively awesome sound Output is known for and as always, it did not disappoint. Voorn appeared unrelenting behind the decks as I moved on the dance floor with whatever space I could find. Occasionally reaching his hand out to the crowd at the drop of a new track. Everyone was feelin’ it. I’m looking forward to the weeks ahead when I can figure out what his set list was compiled of.

With the changing of the seasons comes a club goers nightmare which is the inability to cool down. Something hard to avoid. After a solid hour on the floor I went up on the roof to get some air and mingle. The outdoor set up wasn’t its usual self as we were forced to take a back door entrance to a ‘sub-roof’ that surrounded the old familiar area. It didn’t seem to matter to anyone because the roof was full of part people taking in one of the best views of the city. It was a great night of heavy hitting tracks and mood shifters.

A great way to unofficially kick off a summer of beats in Brooklyn.