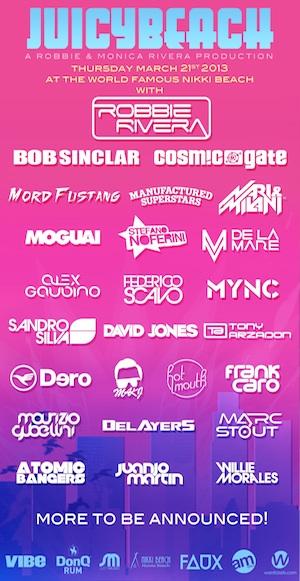 Amongst a week that celebrates the global dance scene which has gained momentum each year, Juicy Beach always stands out as one of the best attractions. Rivera and his wife have been doing it since 2005, and every year A-list DJs and 5500 clubbers are drawn in to the event. Past DJ attendees include Kaskade, Deadmau5, Benny Benassi, Axwell, Sander van Doorn, Steve Angello, Mark Knight, Dirty South, Sebastian Ingrosso, Laidback Luke, Joachim Garraud, Thomas Gold and George Acosta, among others. Definitely make sure you head to Juicy Beach if you are in Miami in March!

Be sure to check out Robbie Rivera’s new track ‘A Thousand Miles’ which will be released tomorrow on Cr2 records. Listen below to the original and remixes! The Juicy World Tour dates after the jump.

Jack Beats – Out of Body

With Jack Beats coming to Webster Hall next weekend in NYC, I decided to drop recently released track by them. I have liked these…