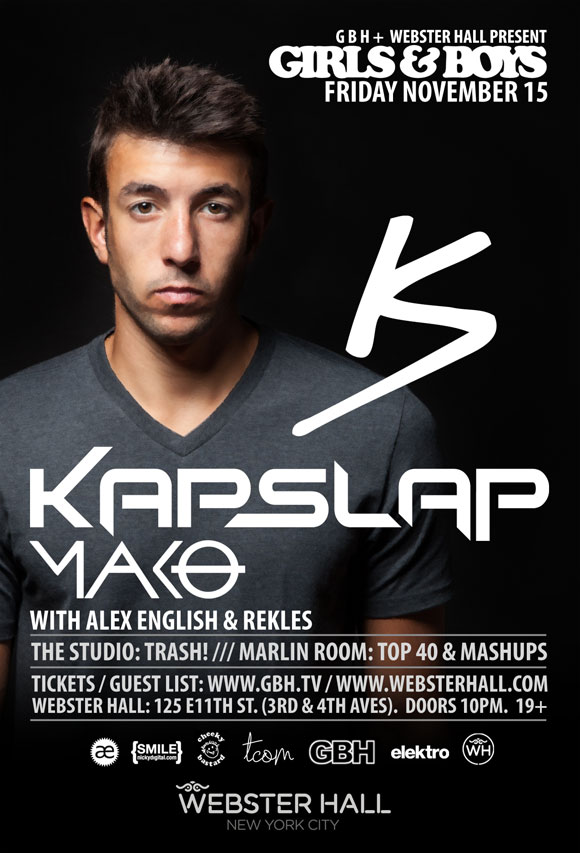 Kap Slap is a new breed of DJ, born of the internet, on the internet and he made his bones through download numbers not record sales. He’s not (yet) known for any original productions, but his bootlegs have garnered him a lot of attention including his capitalizing-on-the-moment (of 2012) mashup of SHM’s “Greyhound” and Canadian pop sensation Carly Rae Jepsen’s “Call Me Maybe”. Recently he’s stayed a little more inside the boundaries of the dance music scene releasing a bootleg pack in honor of hitting 100K likes on Facebook throwing together songs by Sander van Doorn, Ellie Goulding and Kaskade. Though he still keeps his irreverent sense of humor and style with a song featuring some of the vocals from one hit wonder Fountains of Wayne and their iconic “Stacy’s Mom”.

Kap Slap, nee Jared Lucas is a young guy fresh out of college and beginning to hit bigger spots as he tours around the country, you can see a picture of him and a friend enjoying some adult beverages before a show at SMU here. Joining him this Friday at Webster Hall is LA-based duo Mako who have one of the more unique origin stories in the scene considering one half of the team is a Juilliard trained trained classical musician. There’s going to be lot of musical influences and helluva lot more talent in the room this Friday as Alex English and friends notch another night in their books of being the best Friday night party in the City. You can cop your tickets here.

P.S. We hear Kap Slap is pretty good at Super Smash Brothers on Nintendo 64 and we want to issue an open challenge to him, his terms, his stakes, his rules. We happen to have a Smash Brothers expert in our corner.

New York-based DJ/producer David Berrie is back with a new tech tune. ‘Move’ is the follow up to his Aztec/Undersland EP, which hit No….