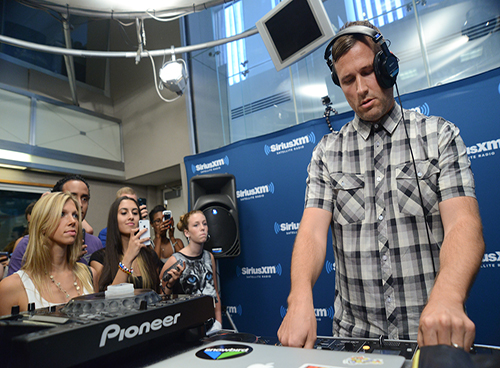 I can’t hear what he’s saying and he’s moving too quick for me to try and read his lips. He’s busy directing the small group of technicians who are trying to get his show on the road because he’s already running 12 minutes late.

But that doesn’t matter at all. If anything, the gap between when Ryan Raddon, better known as Kaskade, appears and his actually saying anything has gotten the hundred-strong crowd buzzing. They’re talking to each other, exchanging stories of their last Kaskade shows and finding mutual friends in cities from Boston to Oklahoma City. 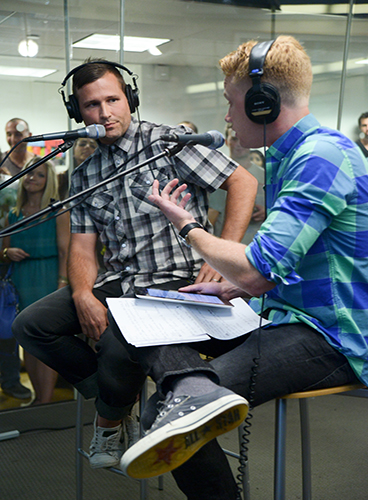 When he first starts talking it’s to Ben Harvey, the host of these kinds of events in what they call the #SXMAquarium. We hear about Ryan and his near-constant interaction with his fans on twitter, sometimes even to the chagrin of wife, Naomi. A few hands shoot up when asked if they got their tickets to the studio through twitter, and even more reach for the sky when they talk about fans that Kaskade actually follows.

I’ve been here before, and I’ve seen a smaller crowd make the room look full. Kaskade’s fans aren’t like everyone else’s fans. They pack in as tight as they can around the man they never met, but feel like they’ve known their whole lives. The dedication his music inspires is truly a thing that has to be felt; it’s a current that runs through every person that can’t take their eyes off of him.

When he’s playing music he’s having fun. He chats with the fans and even poses for a girl who instagrams the shot of him, and his laptop with her company’s logo on it. He played some festival mashups of his tracks with big room drops, like “Eyes” and Martin Garrix’s “Animals”, which actually blew out one of the speakers in the studio. The blowout prompted a look of faux shame and shock on Kaskade’s face before his face turned incredulous as he elicited a laugh by saying his headphones were bigger than the speakers so what could Sirius expect.

The SirirusXM crew provides a home for electronic music like no other in the US. We don’t have any Pete Tong’s, Annie Mac’s or Zane Lowe’s who curate the airspace with the music and artists they like. Electric Area, as a programming block, is doing what no one else is, and actually trying to reach that level of respect that those British DJ’s have and they’ve done an amazing job so far. Their fishbowl/terrarium/aquarium/magnifying glass of a studio is one of the more interesting places to hear a DJ and an incredibly intimate way to check out a musician you love. I get really excited whenever I get to go check out some tunes there and I think in this life that’s really all we can ask for. 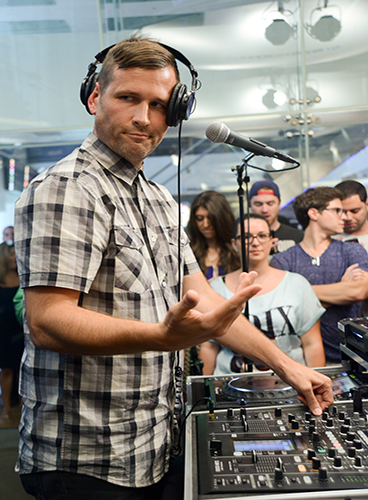 Felguk – Unleash The Scary Side (Mash Up)

A stunning mash up done by the Felguk boys. They used this as their Las Vegas EDC 2011 intro. Unbelievable stuff here. They perfectly…