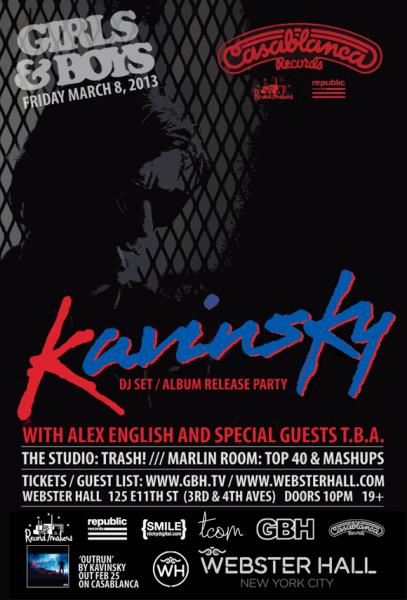 If you’ve ever seen the movie Drive you are probably familiar with the “80’s” vibe that it gave off. If you are familiar with Kavinsky, you probably understand why he was hired to produce a track for the soundtrack. Born Vincent Belorgey, Kavinksy is a French-House artist who has exceeded every expectation that being a French-House artist has placed on him. When it comes to producing electronic music he has the weight of Daft Punk, David Guetta, Martin Solveig, Madeon, Justice and Danger riding on his shoulders. Just trying putting yourself in his shoes…that’s a lot of pressure.

Kavinsky broke into the mainstream with the release of his track “Nightcall”. As previously stated, it was on the Drive soundtrack, but it also batted lead-off on the track-list. From then on, Kavinsky was a name that true electronic music fans would remember. What’s interesting about Kavinsky is that he is actually a character based off of Vincent Belorgey’s life. While they do have many similar characteristics, their back-stories are completely different. Belorgey says that Kavinsky died in a car crash in 1986, and reappeared in 2006 as a zombie who wants to make electronic music.

Belorgey has created an interesting character, whose music is twice as intriguing. He puts a new feel into an old-school sound, and he’s using it to turn Webster Hall into the best dance-party in the city. With support from Dave 1 of Chromeo, the whole night is going to be funky, fun and carefree, so get tickets here while they’re still available.

With his recent collaboration with Matt Zo for ‘Rebound,’ the Russian progressive superstar Arty is back in action with another huge release on Anjunabeats….