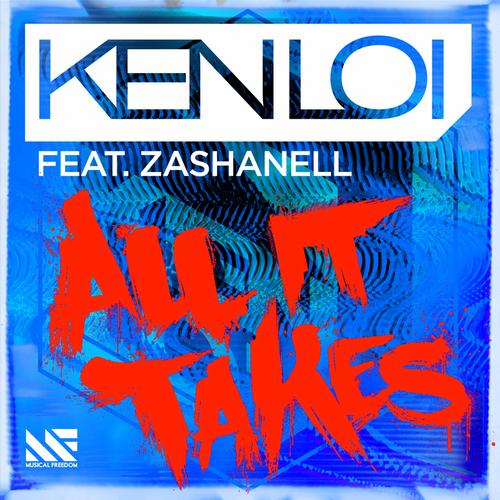 Let’s just say, it was worth the wait. As soon as Ken Loi debuted ‘All It Takes’ way back in December, chatter started about when the track would finally be released. Well, today is the day as the melodious tune, featuring vocals by Zashanell, is out on TiÃ«sto’s Musical Freedom imprint.

Ken is well known for his dynamic and impeccable mash-ups and bootlegs, but ‘All It Takes’ is a special original, not only because of the time spent waiting for the track, but Zashanell’s vocals push the piano driven synths over the edge. ‘All It Takes’ screams crossover – as it has an all encompassing sound that makes it perfect for a great deal of platforms, including radio, festivals, clubs and morning iPod playlists. Be honest – it would be hard to resist singing along if you heard ‘All It Takes’ on your way to work if it came up on your favorite station. So get downloading and make this your summer jam ASAP!

Ken took the time to answer a few questions from EO about ‘All It Takes’ and what the future holds in store – read below and click through for the whole interview!

The release of ‘All It Takes’ was a long time in the making, are you excited now that everyone can listen?

Definitely a long time in the making and many big decisions along the way…but now that we’re there, we are super excited!
There’s been constant messages about it daily for the past couple of months, so I’m really glad to finally share it with everyone :)

Tell us about how you came to collaborate with Zashanell on ‘All It Takes.’

I first heard of Zashanell on her track with the GTA boys on Mixmash, I contacted her immediately after. After many emails we got the ball rolling and now we have ‘All It Takes.’ She sent the vocals over an instrumental I had sent her, they were pretty amazing and it was too good for the demo I had! So I rewrote the track and came up with the version that we hear now.

How does it feel to have a track signed to TiÃ«sto’s label Musical Freedom?

Really accomplished! It’s been a goal of mine for some time, you can ask them how many demos I’ve sent them in the past year ha ha…some say 3rd time’s a charm…but really it could be like the 10th time is a charm ;) So I am looking forward to the release and joining the Musical Freedom family!

Can you tell us how opening for TiÃ«sto at XS in Vegas was?

Only way to describe it…fun! I’ve played with Tijs a few times now, have to say, they are some of the best shows I have ever played!

Your live touring schedule is picking up, how is that going?

Slowly but surely :) Some really cool shows lately and hope it keeps coming!

Do you have any other tracks in the pipeline that you can tell us about?

A lot of unfinished stuff that’s for sure…a few collabs in the talks, a few remixes…the next cool thing I’m excited about is my remix of ‘Angels’ for Adrian Lux, so look out for that soon :)

With a catalog of bootlegs and bookings and even a top 50 Beatport release, the Manhattan-based duo, Hyperbits, have been climbing the local DJ…