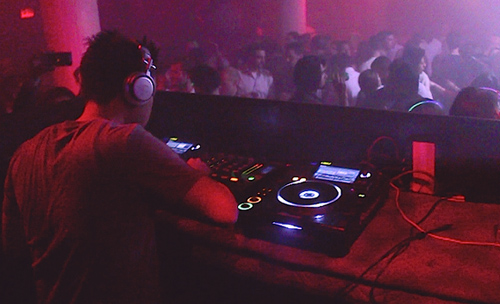 Bay Area producer and bootleg king Ken Loi has an extremely loyal following – a fan base that made a strong showing at Santos Party House Saturday night, despite the date being Easter eve, not necessarily seen as the biggest party night of the season. That it was technically Easter when Loi hit the decks did not seem to matter to the partyers dancing their hearts out as Loi went through a full repertoire of his crazily named, and even nuttier on the ears, mash-ups and original productions.

An intro of electronic music IT kid Miike Snow’s ‘Devil’s Work’ was only a tiny taste of what Loi had in store, as elaborately layered and smashed bootlegs came out of Santos’s booming speakers with wonderful regularity. Starting off with Nero vs. Nicky Romero – Crush On Toulouse (Ken Loi Mashup TT 2) and then straight into Afrojack vs. Eurythmics – Lion Replica Dreams Prutata 2 Vox (Ken Supamashy POO) the stage was set for two hours of classic Loi.

Loi is one of TiÃ«sto’s golden children, having been named ‘Breakthrough DJ/Producer of 2011’ by the Dutch superstar in DJ Magâ€™s Top 100 DJ poll. Tijs also shot Loi’s bootleg of The Ting Ting’s – Hands to the peak of popularity after utilizing the track in his high-profile sets, leading others such as Kaskade and Wolfgang Gartner to pick up on its indie brilliance.

Yesterday brought the release of a new Loi remix to Nordean & Minx Feat. Erik Hecht – You & I, released on Beatport (purchase HERE) for all to enjoy. The big room indie gem gained support from Dirty South, TV Rock, Swanky Tunes and Pedro Henriques, to name just a few.

Loi’s entire set was frenzied and heated and those on the dance floor did not let up for even a second. It seemed that for the first time in quite awhile in these jaded times, the crowded actually knew, appreciated and loved the DJ. With dance music shows going a dime a dozen these days, the pure commitment to the music proved refreshing and restorative.

Throughout the evening fans came to shake Loi’s hand, snap a photo and even crash in the booth for a few fleeting seconds. Like a true star, he greeted all and chatted with those who gave him praise. Intimate moments like these are often rare in the scene – the devoted nature of the crowd made this a very special evening and it is a safe bet that all hope that Loi quickly comes back to NYC.

For someone who has never been to The Panther Room before, the massive lines may have intimidated partygoers. Only would they soon realize that…