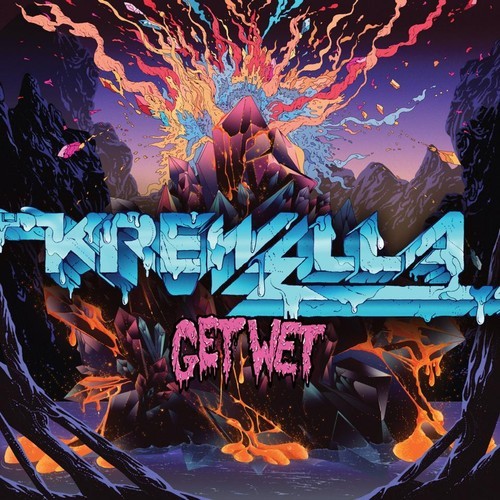 Known for their high energy sets and devoted fans, Krewella dives into dance music head first with their debut studio album ‘Get Wet.’ The 12 track (or 14 track if you purchase through iTunes) album encompasses multiple genres of dance music- consistent with Krewella’s adventurous mentality. Always up for a challenge, the trio successfully produced tracks for ‘Get Wet’ that resonate with electro house, trap, dubstep and drum and bass.

‘Get Wet’ starts off with Krewella’s electro house hit ‘Live For the Night,’ which has recently sparked the interest of Dash Berlin and W&W. The track incorporates the grinding electro break downs that get a crowd moving, while also allowing Yasmine and Jahan’s strong vocals to prevail.

The album’s second track, ‘We Go Down,’ is hard to classify as one genre over another. The song’s verses are sung over a trap-esque beat composition, but quickly lets up to make room for the heavy drum and bass build up before dropping us into a dubstep segment. Often, a track that crosses over multiple does not flow properly; however, Krewella was up for the challenge and effectively produced ‘We Go Down’ flawlessly.

‘Come and Get It’ also harbors aspects of both a dubstep and drum and bass track. The heavy drum kick carries the tempo of the song, while the dubstep grind adds an additional layer to the tune. ‘Enjoy the Ride’ is a more traditional dance music ballad with heart-felt lyrics and a slower tempo that builds us up to a nice progressive house drop that is still suitable for a club setting and not only a big-room festival. On the contrary, ‘We Are One’ possesses those big sounds that you can imagine played at Ultra or other comparable dance festivals.

Next up is Krewella’s hit single ‘Alive‘ whose lyrics and catchy tempo are recognizable to almost everyone immersed in the dance music community. ‘Pass The Love Around’ seems to be Krewella’s testament to their love for the dance scene and how happy they are to be pursuing their dream. ‘The chains are gone, No ones stopping us from livin’ out loud. From dusk ’till dawn, We lose ourselves in the arms of this crowd. We spill our lungs, Exhale this night out. All we really want is right now, We’re never going home. Never gonna be alone.’ The lyrics chronologically sum up a day in the life of night owls like Krewella and how special the lifestyle is to them.

With ‘Ring of Fire,’ Krewella sticks their toes into the Hardstyle world, with a drop that is amped up to a pulsating 140 BPM. They recently recorded a tack with Headhunterz, ‘Kids of the World,’ which reaffirms their desire to constantly push their personal boundaries and try new things.

‘Human’ is a beautiful dubstep ballad that really allows Jahan and Yasmine to show off just how powerful and strong their vocal chords are. ‘Killin It’ also errs on the side of dubstep, but is a much heavier, glitchier track carried more so by the tune than the vocals.

The fourteenth, and final, track on the album, ‘This Is Not The End’, features Pegboard Nerds and seems to function as Krewella’s artistic PSA telling the world that this is not the last you will hear from the trio.

For those who purchase the album via iTunes, Get Wet also contains two bonus tracks. The first, ‘Lights and Thunder,’ features Gareth Emery and harbors a big-room house sound as well as melodic breakdowns where Gareth’s influence shines through. The second bonus track is an acoustic version of ‘Enjoy the Ride’ that provides an alternative perspective on the dance ballad.