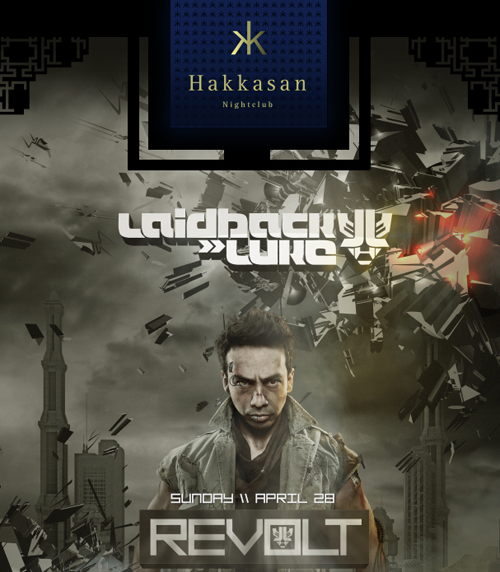 Highly acclaimed and world renowned DJ/Producer Laidback Luke kicks off his latest endeavor, ‘Revolt’. The brand new, unparalleled party series begins this Sunday, April 28, which will be held at the alluring Hakkasan Las Vegas at MGM Grand Hotel and Casino.

A man who is proving to be full of surprises is exposing another layer of his creativity with Revolt. Without revealing too much, Luke acquaints us to an alluring experience like none other that we have seen from him thus far. The theme of the exclusive series of events is going to take attendees on a spiritual journey; it will generate a sense of unity and harmony between the people and the music. He is promising a unique adventure with fresh sounds and extraordinary sights that will generate an energy quite distinct from anything he has performed for his fans before.

“Hakkasan Las Vegas is going to be an experience beyond anyone’s imagination,” Laidback Luke said. “What I’m doing at Hakkasan will be completely different from anything my fans have seen or heard from me and I’m very excited to be able to celebrate and share this Hakkasan specific series of events with my fans. Revolt is a new time ready to happen”

Fans of Laidback Luke will also get the opportunity to dance with him in the heat of the sun when he brings his performances to WET REPUBLIC Ultra Pool, the beloved playground of MGM Grand, this May. His new concept this summer is not something you’re going to want to miss!

These Swedes just know how to kill it. This mix is awesome and incorporates mostly the freshest electro tunes out there. The Dada boyz…