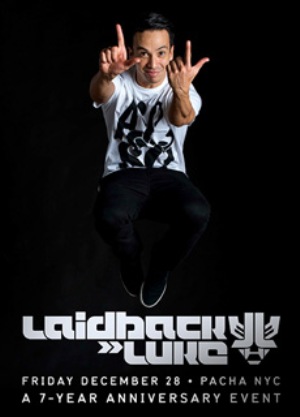 The last weekend in 2012. Madness. Pacha was sold out. People were packed in Wall to wall ready to dance the night away for one reason, Laidback Luke. Its truly amazing to see what the EDM world has risen to, with so many people packed into Pacha to share their love of dance music. Opening up the night was Gina Turner who only on special occasions opens up for LBL which is surprising as they are husband and wife.

After Gina Turner warmed up the crowd, Laidback Luke came in full speed ahead. He kicked it off with his remix of Steve Aoki’s ‘Emergency’, which got the crowd into it right away. He was full of energy, and the crowd really fed off that throughout the night. The set was an interesting one, with many songs you really wouldn’t expect Laidback Luke to drop. He worked them all in very well though, with many heart pounding, heavy bass drops which erupted the crowd. Pacha’s system is one of the best, and you really feel it throughout your body. A highlight of the set would be Pacha’s giant robotic suits lit up with LED lights raging in front of the crowd. Pacha erupted when LBL dropped ‘Harder, Better, Faster, Stronger’ with the fog erupting from the robotic hands. Laidback Luke threw in a little bit of everything ; from rock to trap to hip hop, he kept the place alive. There was a transition in the set that was epic, from ‘Who is ready to Jump’ by Chuckie, to ‘Internet Friends’ by Knife party. It felt as if all of Pacha jumped on that one (no pun intended). One more highlight worth mentioning was LBl’s mash-up of ‘Take Over Control’ by Afrojack. He dropped it so hard with a filthy Dutch/Electro type of beat, blowing the roof off of Pacha. Laidback Luke closed out the set with ‘Turbulence’. This was a perfect way to end the mind blowing 2 previous hours, and the drop was perfect on the speakers throughout Pacha.

Laidback Luke has been around the EDM scene for a while, and he still brings the same energy as if he just started. If you got to experience the show, you couldn’t help but leave smiling. We felt our ears ringing for two hours after, still hearing tracks from the set in our head. What a night it was at Pacha. Sander Van Doorn headlines Pacha on New Years Eve, along with Arty and Julian Jordan. This will be a party lasting hours into the morning and you will not want to miss it. For more information and tickets, click here!

Here is what I’ve been listening to this week. Make sure to check out last weekends playlist, which I am still listening to as…