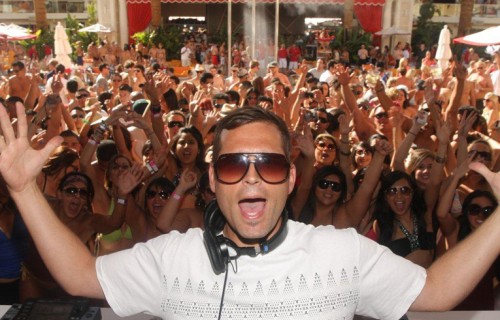 Las Vegas has always been a city of illusion, a self-contained ecosystem where anything is possible and attendees enter another world for their stay. Anyone thatâ€™s been there knows that upon first experience itâ€™s like uncovering a secret world that has operated unbeknownst to first-time visitors.

In a lot of ways, this mirrors the explosion of electronic dance music, so itâ€™s no surprise that DJs and Vegas now not only cross paths, but are seemingly intertwined in many of the same conversations. A recent report in The New York Times records the DJ-turned-rockstar movement in Sin City with some staggering insights.

Still, the phenomenon is somewhat unsurprising. To stay relevant, artists now have the need to constantly connect with large crowds, at times outside the radius of hardcore fans.

So what’s money got to do with it? Read after the jump…

And the supply of money is meeting the demand of the club-goers. Nine of the 30 worldâ€™s richest DJs have monthly residencies on the roster of Steve Wynnâ€™s Vegas clubs – including Deadmau5, David Guetta, and Tiesto. With the number pool parties and superclubs investing in million-dollar sound systems, the playground is set for a complete spectacle each and every weekend as new customers arrive.

Then there is EDC. The relocation of Electric Daisy Carnival to Vegas in 2011 seemed to be the kickstart of EDM in LV. Last weekend saw the evolution of the event, with top-notch talent and a production build that looked more like six main stages in one:

httpv://www.youtube.com/watch?v=QouEu_KR2Hc
The DJs took notice too:

But the weekend was far from flawless. On the second night, Mother Nature took over and extreme winds caused a cancellation of the day, leaving big names, such as Tiesto and Steve Aoki, on hold in the tight schedule. Then there was the traffic which caused the 30-mile journey to turn into a three-hour pilgrimage, even leaving talent out to dry. As excited as young performers were to play, the disappointment is amplified at a missed set: 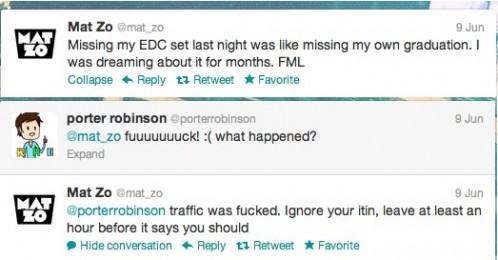 Putting a 300,000+ person event in the middle of the desert and expecting it to go off without a hitch is a tad unrealistic, but this weekendâ€™s feedback begs the question if Vegas has the infrastructure to support this surge of party-goers.

And we couldnâ€™t leave you without a couple of the stand out sets from EDC (at least that weâ€™ve heard so far) – check out streams of Nicky Romero and Knife Party from EDC, each with a ton of new tracks and custom edits for the big stage:

But will Las Vegas continue to keep house music at the forefront of club programming, or will it die out as a new fad picks up. Some of the news around Vegas in recent weeks has referred to top-level talent kicked off the decks for not playing to the likes of a few ignorant albeit rich customers. Mark Farina was removed from the Marquee pool party after a complaint from a high-roller for playing house music – sorry what?

The service level is top-notch, but as a result the customer is always right, when the customer is a bottle-service douchebag with no understanding of the talent, the city will eventually develop a label where even commercialized house gets told to lighten it up (see: Calvin Harris kicked off at Tryst for â€œnot playing Carly Rae Jepsen + hip hopâ€):

Does Las Vegas have the infrastructure, passion, and creativity to keep up with the explosion of house music? For now, what happens in Vegas stays in Vegas, and it seems like EDM is there to stay for now.

Lemâitre, the Norwegian producer duo has really been getting their name out recently. Relativity 3, the duo’s third E.P. release in 2 years is…