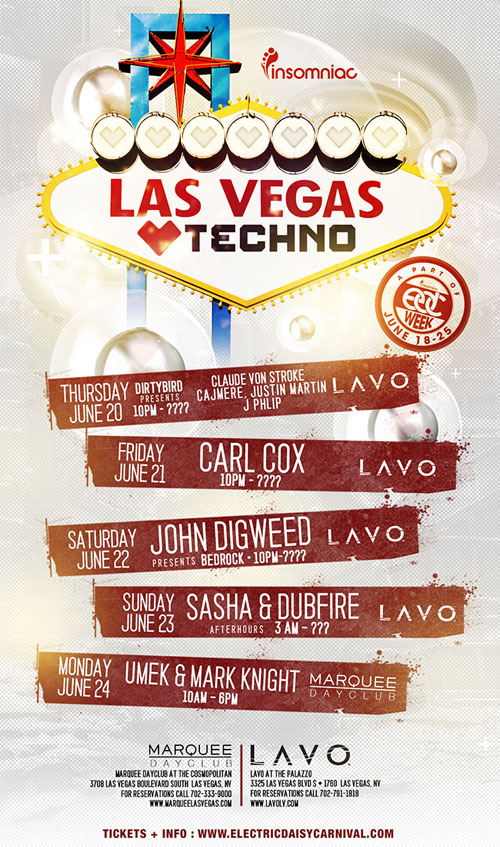 LAVO Las Vegas and Marquee Las Vegas have joined forces with Insomniac Events to host a ridiculous lineup of the world’s top-tier underground artists for the ‘Las Vegas Loves Techno’ event series as a part of EDC Week, June 20th – June 24th. This series marks a new era in the Las Vegas music scene as LAVO and Marquee are pioneering the change from EDM’s status quo. We love the scene of these clubs in New York and can only imagine what takes place in Las Vegas. Both nightclubs bring in beautiful people and an even better array of talented acts. For LAVO tickets/more info click here and for Marquee tickets/more info click here.

By hosting acts such as the Dirtybird label head, Claude VonStroke, the legendary Carl Cox, Sasha, and equally prolific Dubfire, among others, LAVO and Marquee Las Vegas display their all-embracing ideals that establish them as tastemakers with a forward-thinking mentality. They are pushing the boundaries of typical music programming within Sin City to bring something fresh and distinctive to their loyal patrons. With the mainstream direction of EDM these days, along with Beatport Top 10 playing DJs, this is a refreshing change that these two clubs will be bringing.

Event Series Dates and Tickets after the jump