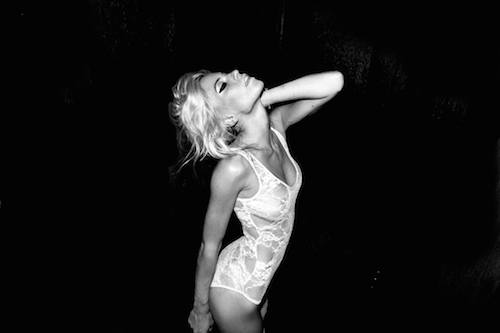 This past Friday I had the pleasure of speaking with the ever-alluring Anabel Englund before she sang live with the legendary Lee Foss, who absolutely destroyed the dance floor. What better a place to chat with her than the rooftop of Output. The weather was perfect and so was Englund’s outfit (pink spandex jumpsuit, a pair of very high heels and light blue hair to boot). This goobie girl was on point and everyone wanted a piece of her. Here’s what Anabel had to say:

ElectronicaOasis: What’s the sexiest city you’ve traveled to?
Anabel Englund: Sexiest city…umm..ahh..I really love Paris just because everyone’s beautiful. Kind of intimidates me a little bit but I love it. Yeah, Paris is the sexiest city.

EO: Craziest thing a fans ever done?
AE: Ok so at We Are FSTVL, the last festival I played in Essex, this girl just had her top up and her tits were out. She was just pretending to play air guitar with her nipples. She was just strumming one of her nipples and I told her (on the mic) ‘yea you have nice tits’ and she would just not put them away. That was one of the craziest things, she just had her top up the entire festival and no one said anything.

EO: If Madonna never existed, who would you biggest musical influence be?
AE: My first thought goes straight to Peggy Lee and Ella Fitzgerlad, I really love them. Althought they don’t have as much sexual expression. I also love Rihanna just based on how she conducts her self as a person not even so much her music. She’s not afraid to have her nipples seen or afraid to show her ass. I think thats what this world needs. I mean if men can be topless why not women?

EO: Do you have any rituals when you’re writing songs?
AE: I’m always carrying a notebook with me just to write things down. If I dont, I feel really lost. Sometimes pens are really special, like if I get one from an airflight attendant. I remember where each pen comes from. So there’s no real ritual, I’m just used to writing. Actually my friend asked me the other day how many journals I have and I pulled this duffle bag out with journals dating back from when I was eight years old. I’m a writer.

EO: Any pre-game rituals when performing live?
AE: Not really, I just get so excited from the crowd that it just does it for me. It’s the music. If I get nervous or anything like that I just close my eyes and remember what I’m singing. I go back to the lyrics and let that work itself out. I never focus on stuff like ‘Oh no the crowd is staring at me!’. Obviously they’re going to be watching ’cause I’m singing but if you’re nervous just focus on the words you’re singing and remember why you wrote them. That’s it.

EO: Have you ever watched the movie Beerfest with your Grandma? (For those of you who don’t know, Englund’s grandmother is Cloris Leachman)
AE: No I actually haven’t! Because when it’s your family, it’s your family. It’s my grandma, she’s the best. Who she is in her movies is how she is in real life. She’s pretty damn funny. A lot of people know ‘Great Gam Gam’ as the one warming up the sausages. Well you know, the apple doesn’t fall far from the tree in that category I guess.

EO: Have you ever actually gone skydiving?
AE: No I haven’t gone, I really wanted to once and then that desire kind of faded away. I realized I could maybe die and I don’t really feel like dying. So I never went. I even paid to go and everything. I almost did it! It was like four hours from where I was staying and I had no one to take me. I was by myself so…you can see why I didn’t go.

EO: What’s the best set you’ve ever seen live?
AE: It’s hard to say. They’re all so good. I really liked Tale of Us in Miami. You kind of get used to the DJ’s styles but I guess if you don’t to as many shows as I do, it’s all new. The thing is when you realize you like someone you can go on Soundcloud and then just hear them. I really like Lee and MK’s sets even though I work with them (in the trio Pleasurestate). Especially with MK, I just love how he’s always playing his own music. He could play a whole set of just his own stuff. To be able to an entire set of exclusively your music, that takes serious skills. It’s never dull and always good.

Following the recent release of the DJ Mag Top 100 2013 rankings, in which Tiesto got bumped down two spots to number four but…