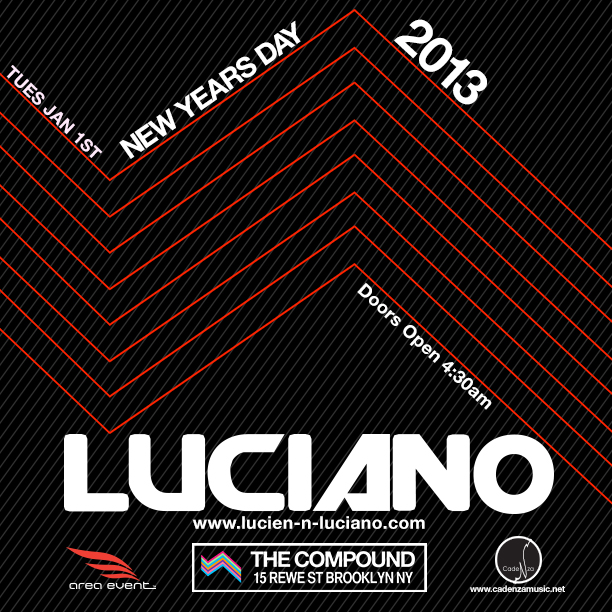 The Cadenza head and Ibiza kingpin, Luciano, really outdid himself with this one. What an unbelievable party and an exceptional way to begin 2013. The warehouse space, which was riddled with speaker stacks and LED screens along with loads of garbage left over from the Dada Life party earlier that night, was a perfect setting for this type of gig.

Sleepy & Boo played really well to open it up, dropping big records like the Carl Craig remix of Life and Death (Tale of Us + Thugfucker) – Morgana. Even then you could tell the night was going to be special. Luca Bacchetti then hammered away at a packed dance floor, with tasteful italian tech house that was reminiscent of the earlier stages of a marathon Marco Carola set. Massive breakdowns and familiar vocal samples made for an ideal opening. When Luciano came on promptly at 9 AM, the energy was palpable. His intro was short yet effective, just enough to let everyone in the 65,000 square foot warehouse know that the headliner was on. Just LOOK how crazy people were going. He played tracks like Sis-Nesrib, Basement Jax- Samba Magic, Monkey Safari- High Life (Cheeky Bold Cover), Robert Hood- Interior Suspect, and his classic Rise of Angel (below). They all went over incredibly well, and the venue was rammed even for Fanciulli who played from 1-5 PM. This NYD was a great success for Area Event (amazing production and bookings) and all who attended (amazing stamina as NYD parties can be rough). Lets all hope this is going to be an annual occurrence for Luciano!

Boys Noize is back with another massive compilation just in time for Miami. This years mix comes equipped with bangers from artists like Strip…