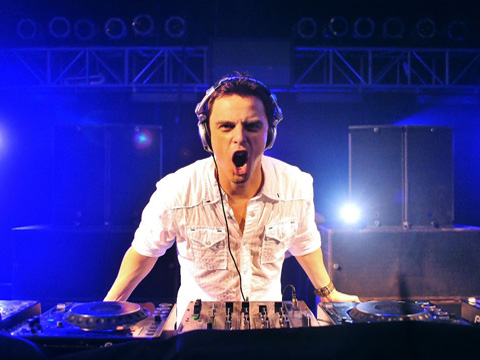 We have been to tons of events and festivals throughout the years. All we can say is, this by far was one of the most enjoyable and hard hitting sets we’ve seen in years. Some of us hadn’t been to a Markus Schulz event before, but I convinced some some to go. There is no one else in the business that can spin big room progressive trance like Markus Schulz. His set last Friday night, June 17th, demonstrated this with complete domination. With Markus on tour for his new upcoming album, ‘Where Thoughts Become Things II‘, to be released July 1st, Markus took the decks from 12:30-6AM. It had been a while since Markus was in New York City, last giving an appearance during last years Electric Zoo Festival 2010. But this only showed his versatility as a DJ. His festival acts compared to his club acts truly portray the artistry of Markus. First is, in the club scene you will get a full extended set whereas at a festival act you only get a small portion. It’s these types of club settings where if you have a chance to see Markus, you really just have to go see him. It’s a true experience for anyone, whether you’re into trance or not. He will take you on a journey that explores every cleft and crevasse of the progressive/trance/techno/house panoply. Especially with Markus previewing every track from his new album, ‘Thoughts Become Things II’, Markusâ€™ alter ego is clearly conceived as a channel through which he explores the darker and more devoutly club side of his mind. It’s a truly amazing live experience. Some of the newer tracks from his upcoming album that were absolutely massive in the club were, ‘Sleepwalkers‘, ‘Sinners‘, and ‘Saints‘ just to name a few. By 3AM, Markus was unleashing fury on Pacha and it never stopped. How he kept it up for 3 hours without slowing down ONCE is absolutely a mind-blowing experience. Dropping his ‘Big Room Reconstructions’, (re-masters and edits tracks for big room clubs only) one after another was just disgustingly good. Check out some Big Room Reconstructions and PLENTY OF VIDEOSS after the jump!!! (read more)

A great way of rating the speed and intensity of the night was when he dropped ‘Sander Van Doorn vs. Afrojack & R3hab – Koko Prutataaa (First State Mashup)’ at ONLY 1:30 AM!!!! He never slowed down… the BPM picked up slowly throughout the night. Most DJs will have many peaks and valleys, ups and downs throughout their set… but Markus creatively weaved a seamless set into a steady growing monster. He also played the stuff you might not expect from a trance DJ like Markus, but when in an extended club set, you’re wrong. Expect to hear songs like this too:

Hard Rock Sofa & St. Brothers – Blow Up (Thomas Gold vs. Axwell Remix) transitioning into Terrace 5AM (from new album).. you can really hear how smooth he is and how the momentum doesn’t stop…

And then comes around 3AM plus and you are probably wondering, what is he playing at this point? Well, before he went to Pacha, he tweeted earlier that night, â€œOn my way to Pacha for soundcheck and to setup recording equipment. Gotta make sure the building will be able to handle the fury of the night.â€ Well, he was damn right that’s for sure. And Pacha held it’s ground as it unleashed the MAX of all it’s party favors. Â Below you can see what he started playing during peak hours.

Markus is set to be at Electric Zoo Festival 2011 on Friday… I hope you guys will think about giving him a chance and see you there!

Arguably the hottest DJ in the game right now, Nicky Romero announces his 2013 North American Tour, ‘Nothing Toulouse’. From Canada to Puerto Rico…