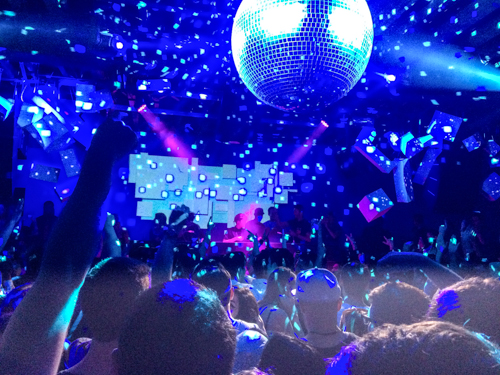 They really put a lot of heart and soul into Verboten. The space is beautiful. They thought of every last detail: the strategic lighting, the heavy curtains lining the wall, the giant disco ball ruling over all on the main floor. The place is a balance of grimy underground warehouse (which is once obviously was) and luxe curated art space. It separates itself from neighbor Output, literally around the corner, with traditional VIP tables and bottle service.

The venue is just beginning to heat up for the summer, and into this fray comes Maya Jane Coles, our favorite tiny British house DJ who always brings a party. We arrived just after the club opened, but it was already filling up and the main floor crowd was growing thanks to a skillful opening set by George Fitzgerald and his unmistakable hair. He and Coles have a special chemistry together that we previously witnessed at Verboten’s 2014 New Year’s Eve party and, although they weren’t DJing back-to-back, the excitement was there. When Coles showed up in the booth, nearly everyone stopped dancing to cheer her arrival. The lights lowered, the music slowed, and then she was on, banging out a killer set. We wish it went on longer than the few hours she played. In the middle of her set, she dropped a noticeable track, Bambook‘s ‘Humble Hearts,’ which we are now addicted to. Check out our review here.

Around 3am, the capable Alex Arnout took over the decks and took us down a groovy route as we got deeper into the night. While we would love to hear an extended set from Coles, the three together form a unique house music experience and we hope to catch them again soon!

The first original release from Hyperbits truly demonstrates Robert and Serik’s growth and maturity as producers. Coming off a hot streak of highly supported…