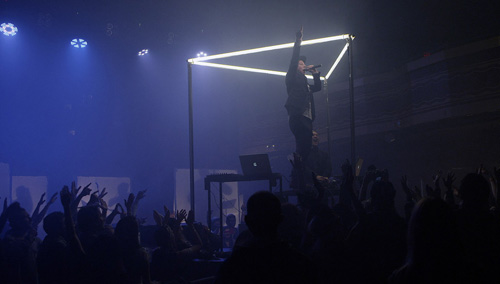 New Zealand dubstep duo Mt Eden are riding on the recent success of their second EP, ‘Walking On Air’ and adjusting to producing under one of the biggest labels in EDM, Ultra Records. This month, they’ve been selected as MTV Iggy’s Artist To Watch. Past up-and-coming artists who have been featured on the video series include Flux Pavilion and Skream.

MTV Iggy filmed the duo live at Webster Hall performing the single ‘Airwalker’ off their EP. Their performance is captivating and interactive, with Mt Eden choosing to DJ from a raised platform in the center of the main room, rather than on the usual stage. Live string musicians and singer Diva Ice performed their parts from the stage as the crowd gathered around Mt Eden to enjoy a unique lighting spectacle.

Check out the interview to read about the musical influences on their upcoming album and going from a viral internet sensation to signing with Ultra Records. There’s also a video interview below.

Two weeks ago Saturday, the folks of NYC were fortunate to be treated to a sunny and comfortable afternoon, prime weather to dance off…