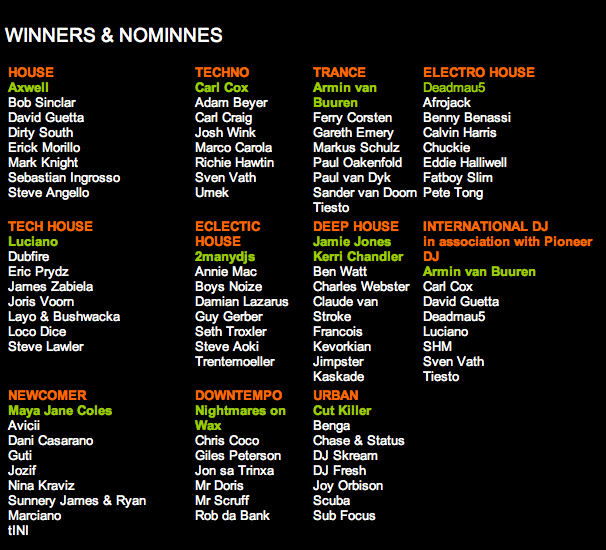 Since 1998, the DJ Awards have been crowning the worldâ€™s best DJâ€™s. From house to electro, tech to trance, they award only the worldâ€™s best. Every DJ who has ever mattered has been nominated in their genre. This year was no different.

A veritable â€˜whoâ€™s whoâ€™ of DJâ€™s was in attendance in this raver version of the Academy Awards. The top prize, Best International DJ, is what Armin Van Buuren, Carl Cox, David Guetta, Deadmau5, Luciano, Swedish House Mafia, Sven Vath and Tiesto, had their eyes on. Much like the DJ Mag Top 100 poll, Armin Van Buuren was awarded the top prize. He has won the Best International DJ award every year since 2009.

Amazingly enough, you can take the runner-ups from each of these categories, throw them in any random country, charge $300 a ticket and have one of the best music festivals in the world. The field is deep and it only parallels the growing Electronic Dance Music movement. Just look ar far they’ve come since 1998