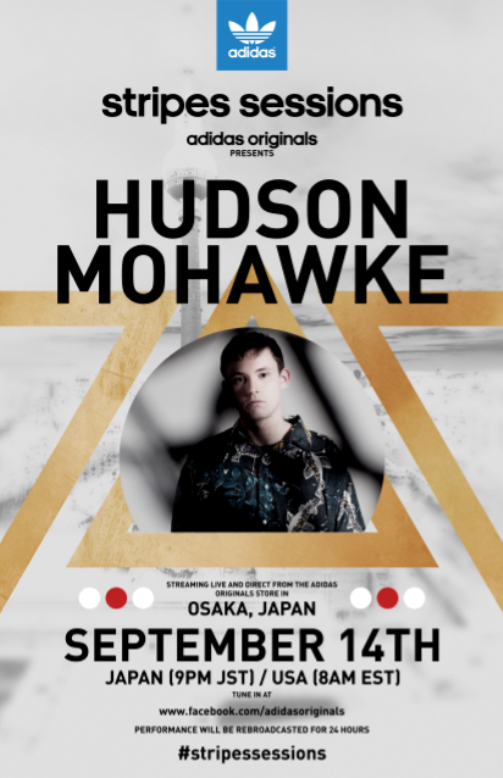 After installments from Dada Life and AraabMuzik earlier this summer, the Addias Originals Stripes Sessions are back, this time featuring Scotish prodigy Hudson Mohawke performing from the Originals Shinsaibashi Store in Osaka, Japan. US fans will be able to tune in via live stream on Facebook at 8am EST on September 14th (can you say morning commute soundtrack?) And don’t fret you non-early birds – the performance will be rebroadcasted for 24 hours.

Check out more information on Hudson Mohawke and the teaser trailer after the jump!

While you may not know much about Hudson Mohawke, or HudMo, the 26 year old producer has been churning out hip hop infused electronic remixes and originals for over 10 years; at the age of 15 he became the youngest ever UK DMC Finalist and has been steadily making a name for himself on the club circuit ever since. Sample some of his beats in the video below to see exactly why he has already produced for the likes of Kanye West, Chris Brown and Azealia Banks.

Don’t forget to check out Addias Originals Facebook page for more information on this and other upcoming events.

Avicii is back with his fourth episode of his monthly podcast, Le7els, featuring tracks from Alesso, Tommy Trash, and many other big time hits!…