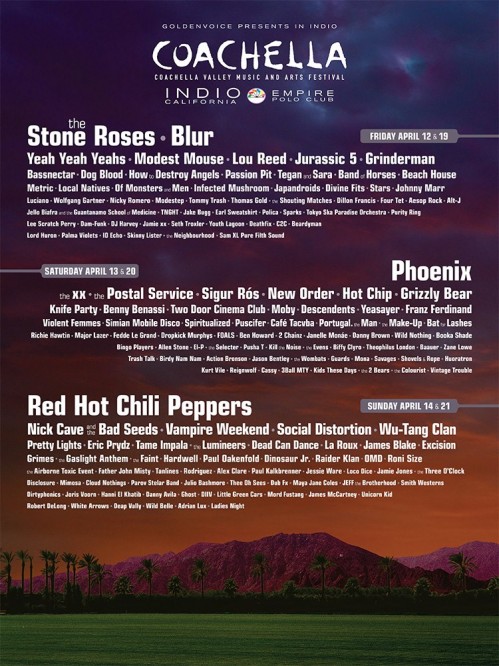 After a year that saw Swedish House Mafia take the mainstage while live performance evolved to include holograms of deceased rappers, the anticipation for what Coachella would do next in 2013 was almost unbearable. Hints of The Rolling Stones, Deadmau5, and the annual Daft Punk hysteria flooded the internet airwaves, and now that it’s here let’s take a look at what electronic acts made the bill this year.

First off – no Daft Punk. While it may be a shock to some, the French duo has been completely silent for years. All speculation has come from outside sources, few of them with credible knowledge. Still, with confirmed rumors of a new album in 2013 and a past Coachella show debut, the timing seemed too perfect. Keep in mind, however, that the last time Daft was spotted performing was during a surprise encore in 2010 at Madison Square Garden with the French indie band Phoenix. The same band who happen to be headlining Coachella Saturday. Too good to be true? At this point it’s impossible to make the call but have a look for yourself:

httpv://www.youtube.com/watch?v=0mODfIpnBlQ&noredirect=1
Next let’s take a look at some of the dance and electronic acts that made the bill. On the surface we’ve got some big room house and electro with the likes of Eric Prydz, Hardwell, Tommy Trash, Wolfgang Gartner, Nicky Romero, Thomas Gold, Benny Benassi, and Knife Party. Add in some interesting bass additions with the likes of Skrillex and Boys Noize duo Dog Blood, Bassnectar, and Pretty Lights. Look even closer and the list gets even more interesting. Disclosure, Jamie Jones, Maya Jane Coles, Luciano, and Richie Hawtin all demonstrate Golden Voice‘s attempt to dig deeper into electronic music.

The verdict? If you’re a lover of all styles of music, this is a solid lineup, even without the punch of big-name headliners of years past. If you’re looking for only EDM in the Sahara tent, Indio might be a tougher sell if you’re looking for talent comparable to Ultra or EDC. All along we thought Coachella would hold the Daft Punk checkmate on every electronic-only festival. Now, we’ll just have to wait and see.

Made Event turned one of NYC’s most festival-like venues into a trance mecca June 30, complete with a breath taking view of the New…