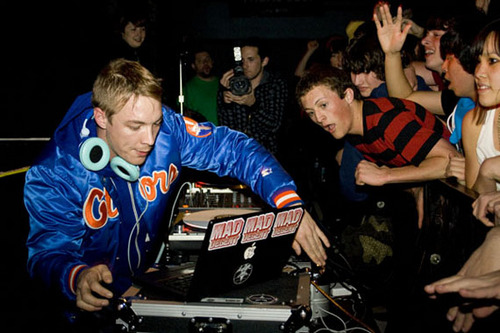 With the constant rise in popularity of EDM, we have now learned that Diplo is producing a movie for Fox. Wait, what? Take that in for a few moments and have all the wild crazy thoughts run through your head and think what the movie could possibly be about.

The movie will be written by Adam Weinstock and Andy Jones, and produced by Trevor Engelson. Noah Rothman will also executive produce. There is no title for the movie as of right now, but what could it possibly be? Twerking, Express Yourself? Not too sure how we feel about an EDM movie, it completely ruins whatever underground status there was left. The currently untitled film has been described as 8 Mile meets Project X, and follows three teenagers as they try to get into a Diplo show. Kusatsu told The Fader in an email that the story is ‘like Eminem and Christopher Walken at a Manchester rave.’

Diplo does tend to put on crazy shows, with girls ‘Twerking’ and many ground breaking visuals, but how could that possibly be turned into a movie. Maybe it will just be a better ‘Night At The Roxbury’. Diplo did study film at Temple University, so maybe the film will be a calling for a new career.

httpv://www.youtube.com/watch?v=d9bQLQI1ptE&feature=player_embedded It is only fitting that house juggernaut Swedish House Mafia end their run together where it began, on the stage of Miami’s ULTRA…