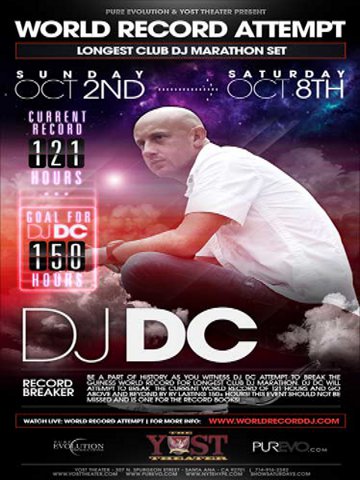 If all goes according to plan, the Austrian DJ will eclipse the current world record holder, DJ King and his 120-hour 19-minute set, tonight at 7:50 p.m. (PST,) and re-write the record books.

As the legend goes, DJ DC has already broken this record, unofficially. In September 2010 it was said he played a 121-hour set, but Guinness was not there to witness it, so it didn’t count.

He is no stranger to marathon sets, as he has performed 76 and 93-hour sets in previous years.

This time around, he is adding a 30 hour cushion so wise guy DJ’s might think twice about attempting to snatch the record. If everything shakes out accordingly, a DJ would have to spin for about a week straight to top DJ DC.

Now, before you blurt out the questions everyone wants to know (where is he peeing? is he eating? ect.,) there are some stipulations. He is allowed a five minute break at the top of every hour (presumably for a power nap or bathroom break). His set is being witnessed by Guinness officials at the Yost Theater, in Santa Ana, CA. And yes, he has actually been playing great house since Oct. 2.

We’ve embedded the link so you can watch history. At points he does look detached and completely drained, but why donâ€™t you try spinning for 100+ hours straight!

Miami is on the horizon, people. But before we head south, we celebrate St. Patrick’s Day NYC-style. Some interesting names will be in our…