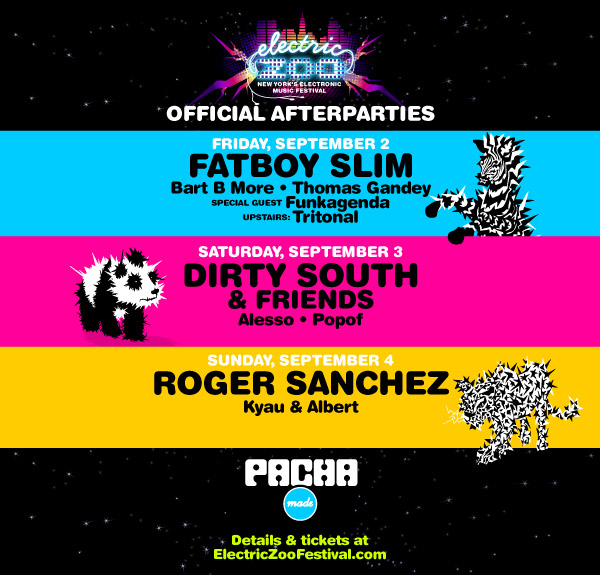 So the EZF 2011 Official Afterparties have just been announced, and the lineups are remarkably good. If 12 hours of electronic dance music at the actual festival isn’t enough for you, take a look at these top tier artists that are gonna be playing at Pacha NYC until the wee hours of the night. Friday night brings in 3 amazing artists in Fatboy Slim, Bart B More, and Funkagenda. I am in love with all 3. I will certainly be at Pacha for Bart B More, as I may miss him on Friday at the festival due to the conflict between his set and Sunnery James & Ryan Marciano’s set. Trance duo Tritonal are apparently amazing according to Robert P, but I don’t know shit about trance so I won’t even attempt to delve into the musical merits of these 2.

Saturday brings in Dirty South, Alesso and Popof. These names need no introduction. Dirty South is one of the strongest forces in house music today. He is actually my #1 DJ and has been since I saw him at Pacha 2 years ago opening for Mark Knight. Alesso has been smashing it since his outrageous ‘Pressure’ remix. and Popof has been a household name for years, consistently dishing out quality productions.

Sunday is for the real degenerates. Amazing tech and tribal served by Roger Sanchez. If you are able to attend Pacha on Â Sunday night after a 3 day electronic dance music festival, you are a sick sick person! Kayu & Albert are also amazing. These afterparties are pretty overwhelming, but with talent like this, it could be worth it to suck it up and rage.

During David Guetta‘s set at Ultra this year, he announced that he was starting up a record label entitled Jack Back Recordings to release…